From Delft to Dublin: Embassy of Ireland in the Netherlands celebrates upcoming Dublin exhibition of works by Vermeer and the Masters of Genre Painting at the Mauritshuis Royal Picture Gallery in The Hague 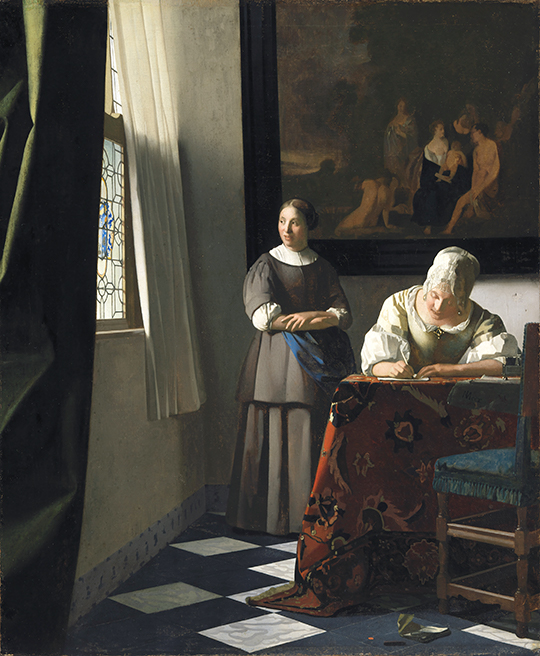 With just days to go before the landmark exhibition Vermeer and the Masters of Genre Painting: Inspiration and Rivalry opens at the National Gallery of Ireland, the Embassy of Ireland in The Hague hosted an evening at the Mauritshuis Royal Picture Gallery to celebrate what will be one of the most important events on Dublin's cultural calendar this summer.

Bringing together a beautiful selection of Dutch genre paintings, including ten works by Vermeer, which is almost a third of his entire oeuvre, the exhibition examines how the masters drew inspiration from one another's works, together achieving the extraordinary richness and refinement that characterises the paintings that the Dutch masters produced in the mid to latter stages of the seventeenth century.

Ambassador of Ireland, HE Mr Kevin Kelly and Ms Emilie Gordenker, Director of the Mauritshuis, welcomed a full house to the event. Guest of honour at the event was exhibition curator and Head of Collections and Research at the National Gallery of Ireland, Dr Adriaan Waiboer, who spoke of how the concept evolved and presented the themes and works in the exhibition. Another special invitee was Mr Quentin Buvelot, Senior Curator at the Mauritshuis, who discussed the works from the Mauritshuis collection that are being very generously loaned to the National Gallery of Ireland for the duration of the exhibition.

Conceived as an opportunity to showcase Ireland's rich cultural offering, guests were invited to see the exhibition in Dublin and take advantage of the opportunity to discover Ireland's rich heritage, summer arts and music festivals, and beautiful landscapes. Dublin will be the last chance to see the works in Europe, following a record number of visitors to the show in the Louvre in Paris.

Inspired by the Frans van Mieris painting, The Oyster Meal, which is one of the works from the Mauritshuis collection that will feature in the Dublin exhibition, guests were treated to a taste of Irish hospitality with fresh Irish oysters and Guinness. Guests also enjoyed live music from improvisation group The Scroll Ensemble playing from the Dublin Virginal Manuscript and other 17th century manuscripts from Ireland and Holland.