The Embassy of Ireland was delighted to host the Ireland Netherlands Business Association AGM and New Year Reception on 9 February 2017.

On 9 February 2017, the Ireland Netherlands Business Association (INBA) held its Board Meeting and Annual General Meeting at the Embassy of Ireland in The Hague. The meetings were followed by a reception for current and prospective INBA members and associates hosted by the Ambassador of Ireland to the Kingdom of the Netherlands, H.E. Mr Kevin Kelly. 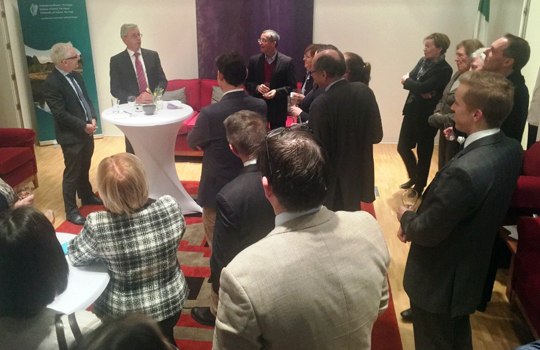 The Ireland Netherlands Business Association works closely with Irish state agencies and the broader Dutch and Irish business communities in the Netherlands. Membership spans the business spectrum from international public companies to small and medium sized companies and semi-state organisations. The association, established in 1991, is non-profit and is funded on a voluntary basis.

The Embassy is a strong supporter of the INBA and sees the Association as a key partner in promoting Irish business interests in the Netherlands. Ambassador Kelly is the Patron of the Association and the Embassy is represented on the INBA Board.
E-mail enquiries regarding membership can be sent to info@inba.nl