Find out about the history of the Chancery Building, Official Residence and Ireland's previous Ambassadors to the United States. 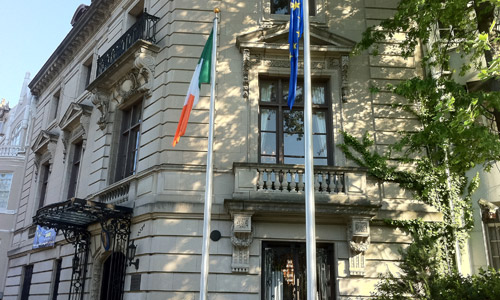 The Embassy of Ireland in Washington has been located at 2234 Massachusetts Avenue at Sheridan Circle since its purchase by the Irish State in 1949.

The original architect of the house at 2234 Massachusetts Avenue was William Penn Cresson. The Republican Governor of Louisiana William P. Kellogg (1873-1877) was one of the first owners of the property. Kellogg was also elected to the United States House of Representatives in 1882 and served one term from 1883 to 1885, after which he continued to live in Washington.

The semi-detached limestone building has two major facades (Massachusetts Avenue and Sheridan Circle). The interior circulation and rooms which are designed about a central stair hall, as well as the combination of reflective surfaces and natural light, produce an illusion of greater space.

Today, the building includes formal reception rooms which have been maintained in their original style as well as offices for Embassy staff.

There is an annual open day for members of the public at the Embassy in early May.

Sheridan Circle features a statue of Civil War General Philip Sheridan. The statue was dedicated in 1909 in the presence of President Theodore Roosevelt. The houses surrounding the circle were originally built in the first decade of the twentieth century.

Two blocks to the north of the Circle is a bronze sculpture of the Irish patriot Robert Emmet by Jerome Connor (1876-1943). This statue was dedicated in June 1917 in the presence of President Woodrow Wilson and rededicated in 2016 as part of the programme commemorating the centenary of the 1916 Rising. 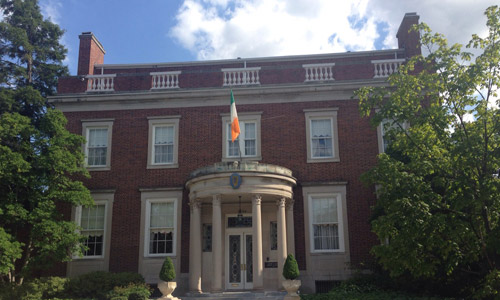 The Residence of the Ambassador of Ireland, situated at 2244 S Street NW, was historically named the Frederic Delano House following its construction in 1924.

The building was designed by noted Washington architect Waddy B. Wood and built for Frederic Delano, member of the Federal Reserve Board and uncle of Franklin Delano Roosevelt.

The Irish Government purchased the house in 1965.