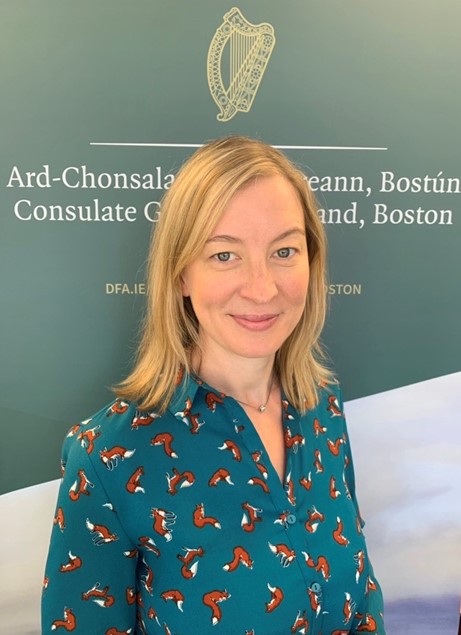 Laoise Moore was appointed Consul General of Ireland to New England (Maine, Massachusetts, New Hampshire, Rhode Island and Vermont) in May 2019. Laoise is originally from Swords, in North County Dublin. She was educated at St. Cronan's National School and St. Finian's Community College, Swords. She completed a degree in Human Genetics at Trinity College Dublin and a Masters degree in World Archaeology from Pembroke College, University of Cambridge. She holds a PhD in Genetics from Trinity College Dublin.

Upon completing her PhD Laoise worked for Accenture. Following this she joined the Department of Foreign Affairs and Trade, where she has worked in Development Cooperation Division, the Press Office and Europe Division. She also worked at the Oireachtas (Irish Parliament) on Foreign Affairs, British-Irish relations and Northern Ireland. She has served abroad at Ireland's Consulate General in Edinburgh, and at the Embassy of Ireland in Malaysia. Immediately prior to coming to Boston, Laoise worked at Department of Foreign Affairs HQ in Dublin, focussing on EU foreign policy.

From her base in Boston, Laoise works alongside the Consulate team to strengthen Ireland's links with New England, to promote Irish culture, heritage and interests, and to provide services to Irish citizens in the region.