'The Patriot Game' by Tom Murphy

The Embassy of Ireland is pleased to support Abandon Theatre Players production of Tom Murphy’s ‘The Patriot Game’.

Described by Brian Friel as ‘the most distinctive, the most restless, the most obsessive imagination at work in Irish theatre today’ Tom Murphy has worked closely with the Abbey Theatre in Dublin and the Druid Theatre in Galway over the course of his 50 year career as a playwright.

‘The Patriot Game’ was written in 1965 as a television play at the time of the 50th anniversary of the Easter Rising but was not produced. Murphy revised the work for a stage production and it was eventually produced for the first time in 1991 on 75th anniversary.

The play revolves around a group of young actors who meet to present a dramatisation of the Easter Rising, some of them passionately in agreement with the 1916 leaders and others cynically opposed to the cause, at least until the full story begins to unfold.

Details of all 1916 events taking place in Western Australia are on the WA remembers 1916 website . 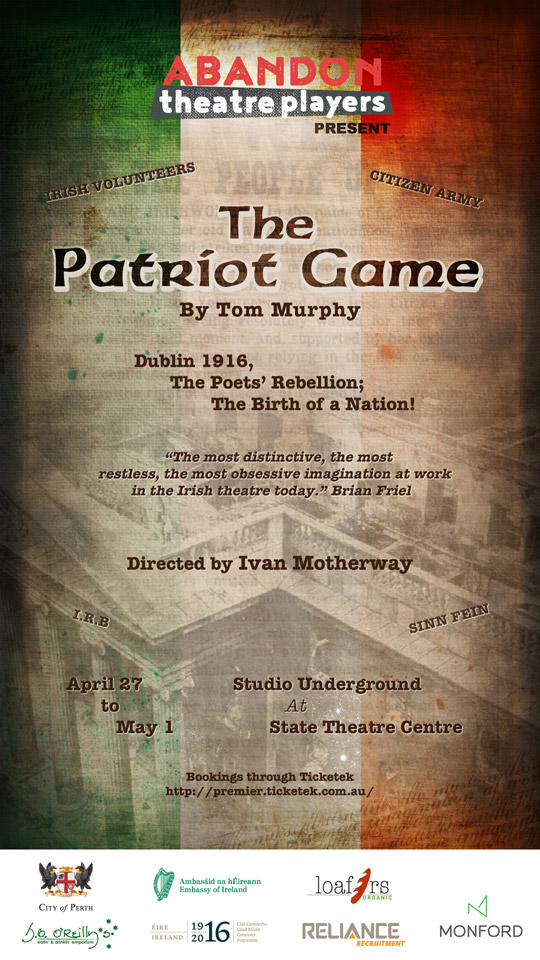