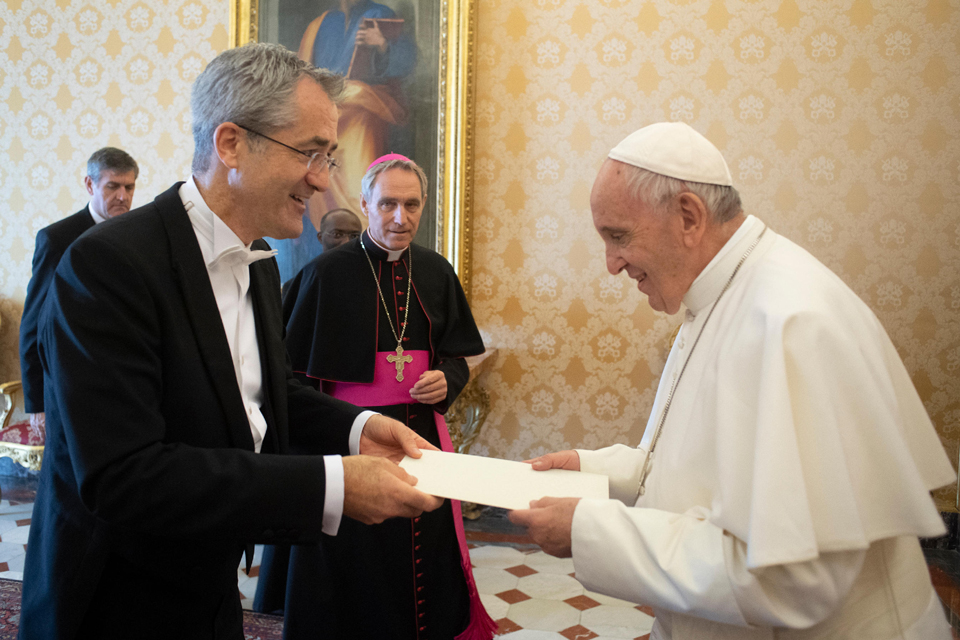 Derek Hannon graduated from University College Dublin with a Bachelor's Degree in English and History and a Master's Degree in History. After college he began his career in the Office of the Revenue Commissioners.

He joined the Department of Foreign Affairs in 1986 and has served at Ireland's missions to the Holy See (1988-1992), Budapest, London and Washington DC. He has also had short assignments at Ireland's Permanent Mission to the UN in New York and in Lisbon, Portugal.

In addition, he has served in most of the principal Divisions at Headquarters in Dublin where he has worked on a broad range of policy areas including Nuclear Disarmament and Non Proliferation, Northern Ireland affairs, the Middle East and most recently European Union matters.

Message from the Ambassador

I am honoured to have been appointed by the Government to serve as Ambassador of Ireland to the Holy See. I served as deputy at this Mission between 1988-1992 so coming back to Rome and working again on one of our oldest diplomatic relationships is a privilege as well as a cause of great personal satisfaction. As Ambassador my primary goal is to strengthen our bilateral relationship as we celebrate 90 years since the establishment of diplomatic relations in 2019.

Ireland and the Holy See share a common approach to many of the major challenges facing us today including Climate Change, the Environment, Nuclear Disarmament as well as promoting human rights and addressing issues of Development. I look forward to working with the Holy See and the wider religious community on these.

Since my arrival in Rome I have been re-connecting with old friends in the Irish Community as well as establishing new friendships. I look forward to developing these over the next four year.