The Embassy of Ireland invites you to a screening of ‘The Queen of Ireland’ in Kinoteka at 18.30 on Thursday 7 June.

The Queen of Ireland’ is an award-winning documentary film about the life and work of Panti Bliss, Ireland’s best-known drag queen and LGBTI activist. Created by Rory O’Neill, Panti’s fight for equality and against homophobia has become recognised across the world. In 2015, Panti became a symbol of Ireland’s path to marriage equality. ‘The Queen of Ireland’ follows Rory’s journey from a small rural town to the world stage as Panti Bliss.

The film shows Ireland’s path to equality, and the fight against homophobia, through Panti’s personal experience.

Tickets are free and available on a first-come, first-served basis at the ticket office of Kinoteka from Friday 1 June. The ticket office is open daily from 9.30 to 21.00. The film will be screened in English with Polish subtitles. The film is rated 15A (Ireland). The screening is taking place as part of Warsaw’s Equality Festival. 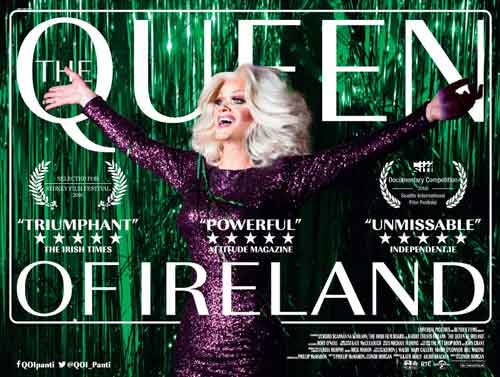