Lecture: The life and work of Seán Lester

Dr. Paul McNamara’s lecture on the occasion of the 130th anniversary of Seán Lester’s birth.

On 18 April the Embassy organised a lecture by the Irish historian, Dr. Paul McNamara, entitled: “The life and work of Seán Lester: An Irish diplomat in pre-war Gdansk and Last Secretary General of the League of Nations.” To mark the 130th anniversary of Lester’s birth, Ambassador Keown named the Embassy’s conference room in honour of Seán Lester. 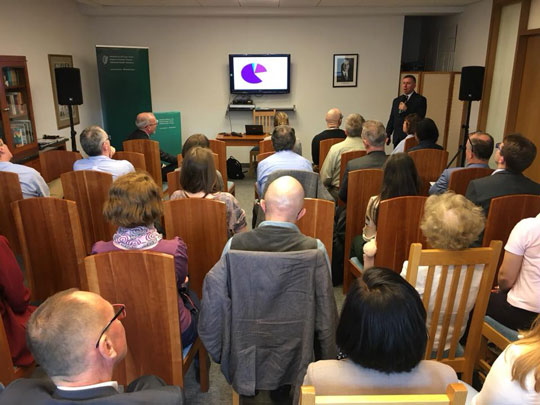 Seán Lester, an Irish diplomat, was appointed League of Nations’ High Commissioner in the Free City of Danzig in 1933. As High Commissioner, Lester protested against the persecution of Danzig’s Polish and Jewish communities. One of the first to warn of the danger posed by Nazism, he defended the Free City’s constitution at a time when the Nazi Party was trying to introduce a National Socialist constitution. Lester went on to serve as the last Secretary General of the League of Nations during WWII, and handed over to the new United Nations Organisation in 1945.

Dr. Paul McNamara is the author of ‘Sean Lester, Poland and the Nazi Takeover of Danzig’. He is a lecturer at the Technical University of Koszalin.