“Visions for Europe” with Spanish think-tank, the Instituto Real Elcano 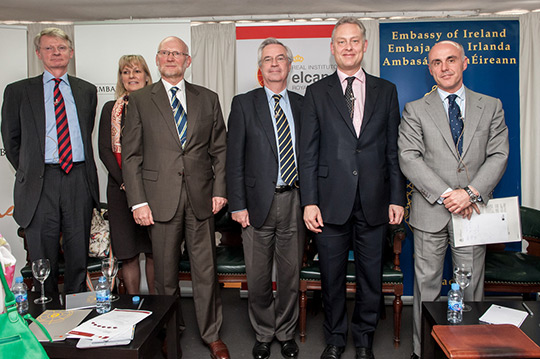 Ambassador Harman spoke at an event organised by the prestigious Spanish think-tank, the Instituto Real Elcano on "Visions for Europe". The event involved a short presentation and Q&A session together with the UK, Swedish and Dutch ambassadors and the Director General for EU Affairs at the Spanish Foreign Ministry. The Ambassador’s remarks focussed on Ireland’s positive experience of EU membership, the country’s emergence from the economic crisis and the major issues facing the Union, including institutional reform, the completion of banking union and the debate in the UK. The event attracted some 100 guests, including key policy-makers, media, academics and diplomats.