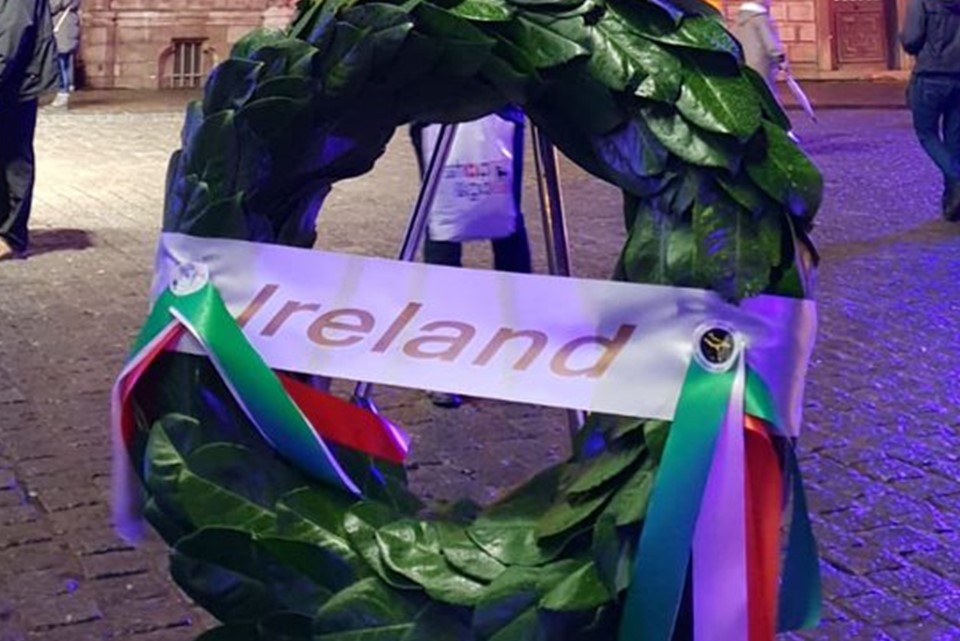 In 2018, the centenary of the World War I Armistice, our team was honoured to represent Ireland at more than thirty events over the unique weekend. We decided that it would be good to bring you a special edition of the embassy newsletter to share these, and other commemorations experiences, which are reflected here in photos and stories from a wide range of very moving events. This has been an important shared journey with Belgium, involving many colleagues, over the 4 years from 2014 to 2018, notably in June 2017. But this has also been a shared journey over the past 20 years, since the Good Friday Agreement and the very significant visit of the then President of Ireland, Mary McAleese, who together with Queen Elizabeth II and the then King Albert II, inaugurated the opening of the Island of Ireland Peace Park with its distinctive round tower, in beautiful Messines. This memorable event in Messines was important for our approach to World War I Commemorations in Ireland.

The experience of engaging in inclusive and respectful commemorations here in Belgium, which are always focused on the lessons of the past for our future, on young people and on a message of peace, has been very significant for Ireland and this has contributed to our own national journey of recognition and reconciliation. Last November in Ireland there were many World War I commemorations and I was privileged to see two very impressive installations, “Fallen” at St Patrick’s Cathedral and “Haunting Soldier” in St Stephen’s Green, both of which had a deep impact on all who saw them and are pictured here in the newsletter.

November is a month for remembrance, a good time to visit this poignant and beautiful WW1 memorial installation in Dublin at @stpatrickscath #fallen 36 thousand leaves, 36 thousand lost lives, a message of peace, hope and reconciliation for these times pic.twitter.com/cI92AtI7lp

The journey together continues even though the centenaries have passed. Our Honorary Consul in Antwerp, Yves Rombouts, has presented to the Embassy, to the Irish Defence Forces and to the Minister for Defence, three unique sculptures from the artist/citizen collaboration “Coming World, Remember Me”, which I had the privilege of visiting when it was first installed in April 2018, pictures of the sculpture and of the installation can be seen here in the newsletter. In 2019, I will have the honour to bring to Ireland the soil from Flanders Fields which was gathered by Belgian schoolchildren in June 2017 and which was presented to Irish schoolchildren during the June 2017 commemorative ceremony in Wijtschate.

Over the course of Armistice weekend in November 2018 the Embassy team, together with Partnership for Peace and Defence Forces colleagues, participated in over 20 commemorative ceremonies and events around Belgium.

On Friday 9 November Ambassador Nolan attended a concert Reflections of World War 1 at the iconic Pottery Church of Bruges, which served as a hospital during WW1, where Irish musician Tracey McRory and her colleagues had performed music, song and poetry, including the world premiere of a specially written piece of music for the Pottery.

Tracey McRory and Richard Laird’s poignant song ‘John Condon’, about the 14 year old who was long believed to have been the youngest Allied soldier killed during World War One features on the ‘World War 1: A Musical Diary, Remembering for Peace’ CD created by the Bandmasters of the Royal Belgian Military Bands to commemorate World War One. 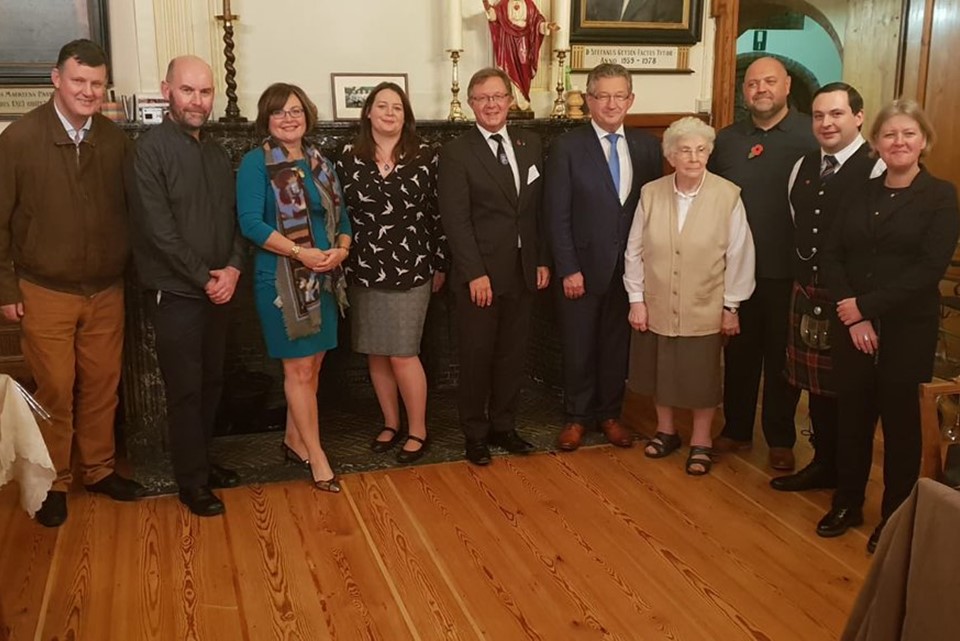 Our Defence Force colleague Brigadier General Philip Brennan attended the opening of the Memorial chairs exhibition in Ypres which contained 130 empty chairs symbolising those who didn’t return from the First World War. One of the chairs was donated by Irish author Dermot Bolger. Brigadier General Brennan also attended the Armistice Day lecture with Kader Abdolah.

Dermot Bolger's chair was one of 130 national chairs carried in a procession through Ypres. The chair was carried by Maurice Couvreur from nearby Wervik. Mr Couvreur is a member of the Friends of the In Flanders Fields Museum who in the past has visited Ireland twice including to the Benedictine order of nuns in Kylemore Abbey in Connemara. Irish Benedictine nuns were forced to leave their monastery in Ypres in 1914 as advancing German forces bombarded the city. Read more about this fascinating story in The Irish Times.

Brigadier General Philip Brennan of Irish @defenceforces represented Ireland at the opening of the Memorial Chairs exhibition by Val Carman at In Flanders Fields Museum in Ypres this evening. The exhibition includes a chair donated by Irish author Dermot Bolger #WWI #Armistice100 pic.twitter.com/hiYOYiaF6a

Our Partnership for Peace colleague Lesley Ní Bhriain represented Ireland at a ceremony at the Ploegsteert Memorial and at a concert of choral music at Ploegsteert Church. 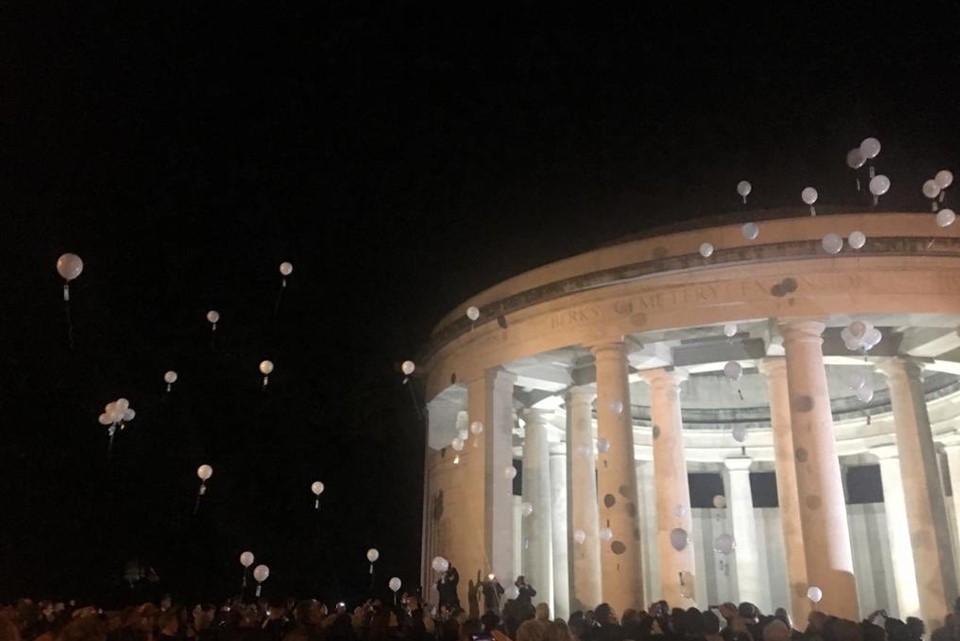 On Saturday 10 November Colonel Des Bergin joined the commemorative ceremony at Saint Symphorien military cemetery, which was attended by the Governor General of Canada, as well as the inauguration of the Price Memorial in Ville-sur-Haine, Le Roeulx which was attended by Princess Astrid of Belgium and Prime Minister Charles Michel. Colonel Bergin also participated in a commemorative ceremony in Soignies, Casteau. 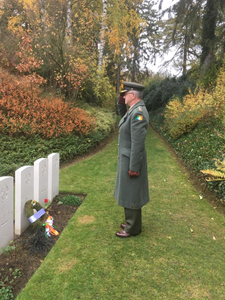 Deputy Head of Mission Ruth Barrett participated in a ceremony at Crest Farm Canadian Memorial in Passchendaele with very moving first-hand accounts from some of those who fought in World War One.

The @IrishEmbBelgium was honoured to lay a wreath on behalf of Ireland at the Passchendaele ceremony at Crest Farm Canadian Memorial last night - a beautiful event with very moving accounts of a handful of the millions of lives lost in #WW1 #Armistice100 @AmbCanBeLux pic.twitter.com/K8SrhauuC6

On Sunday 11 November Ambassador Nolan represented Ireland at ceremonies in Brussels, Mons and Ypres. In Brussels a ceremony took place at the Tomb of the Unknown Soldier which was attended by King Philippe.

Ambassador Nolan then travelled to Mons for the Liberation of Mons Parade before travelling on to Ypres for the Official Last Post ceremony at the Menin Gate on Sunday evening.

Ambassador Nolan @IrishEmbBelgium laid a wreath on behalf of Ireland today at a ceremony to commemorate the centenary of the liberation of Mons by Canadian troops #WW1 #Armistice100 #ArmisticeDay100 @AmbCanBeLux @CanadianForces pic.twitter.com/qY6zeoJK1J

Ambassador Nolan was joined by Lt Col Mary Carroll at the Menin Gate and the ceremony was also attended by the King and Queen. 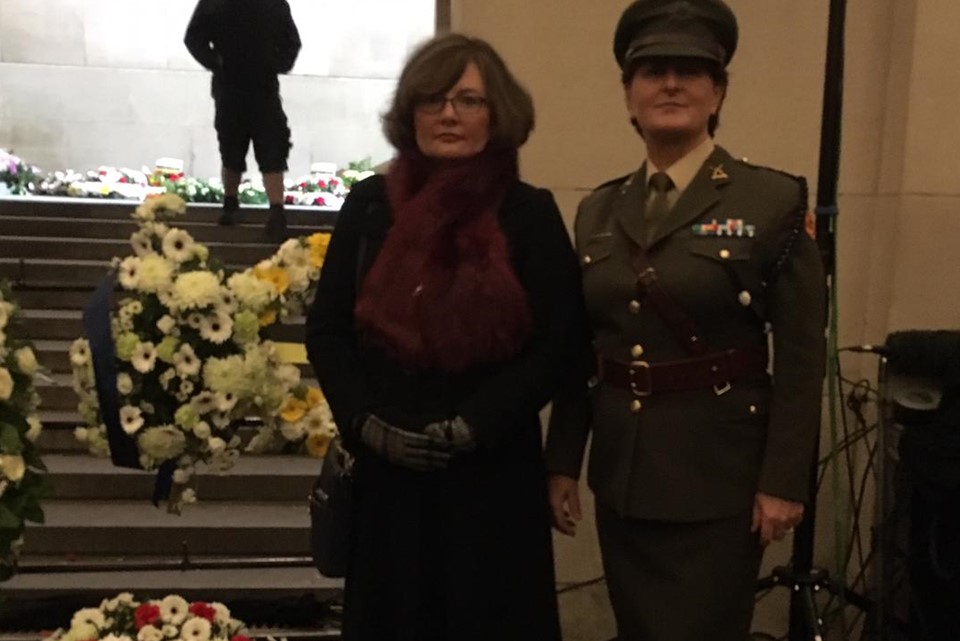 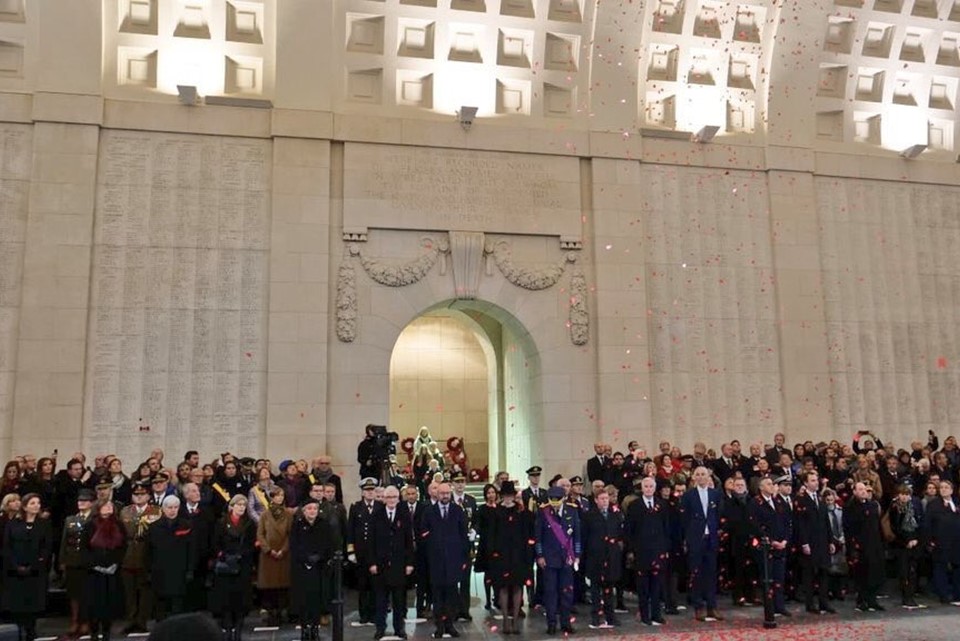 Deputy Head of Mission Ruth Barrett participated in commemorative ceremonies in the town of Messines including at the Island of Ireland Peace Park, on the 20th anniversary of the opening of the Park by President McAleese, Queen Elizabeth & King Albert. Ruth joined the family of the late Paddy Harte in laying wreaths at the Island of Ireland Peace Park. Paddy Harte & Glen Barr created the Peace Park. Ruth then joined The Great War Remembered concert in St Martin's Cathedral in Ypres.

On 7 June 2017, the centenary of the start of the Battle of Messines Ridge, an island of Ireland commemoration, jointly led by the Governments of Ireland and the UK, in partnership with the Mayor of Messines, took place at the island of Ireland Peace Park. The ceremony, which reflected on the engagement, side by side, of the 36th (Ulster) Division and the 16th (Irish) Division at the Battle of Messines Ridge, saw wreaths laid by Taoiseach Enda Kenny, Britain’s Prince William and Belgium’s Princess Astrid. The special ceremony reflected the spirit of reconciliation which the two Divisions have come to symbolise.

This is the Peace Pledge that can be found at the Island of Ireland Peace Park, which is located near #Ieper #Ypres. pic.twitter.com/TKvk1DcVqx

Lesley Ní Bhriain travelled to Aarschot for the unveiling of a new peace Carillon which includes a bell sponsored by the Embassy which bears the phrase ‘Deireadh le Cogaíocht’. 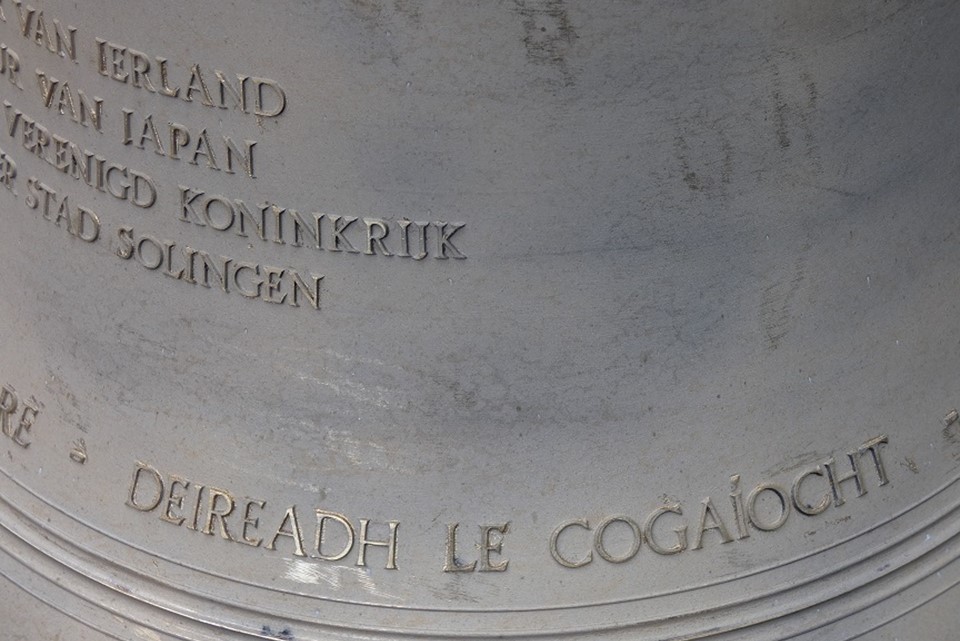 In December 2018 Ambassador Nolan travelled to Nieuwpoort to join a farewell ceremony for Lieutenant Colonel Christophe Onraet, Military Commander of the Province West-Flanders, who retired after nearly 40 year service in the Belgian Armed Forces. Lieutenant colonel Onraet was a wonderful friend of the Embassy and was especially supportive during the planning for the centenary commemorations of the Battle of Messines Ridge in June 2017.

The Embassy would also like to thank Yves Rombouts, Honorary Consul in Antwerp, for gifting a sculpture from the Coming World, Remember Me memorial to the Embassy. The memorial consisted of 600,000 individual clay sculptures, one for each person killed in Belgium during the First World War. The sculptures formed part of a memorial installed in Palingbeek Park in 2018 where they surrounded a giant egg which symbolised a new world. The project was created by Belgian artist Koen Vanmechelen with the sculptures made by schoolchildren, volunteers and artists. Read more about Coming World, Remember Me in The Guardian. 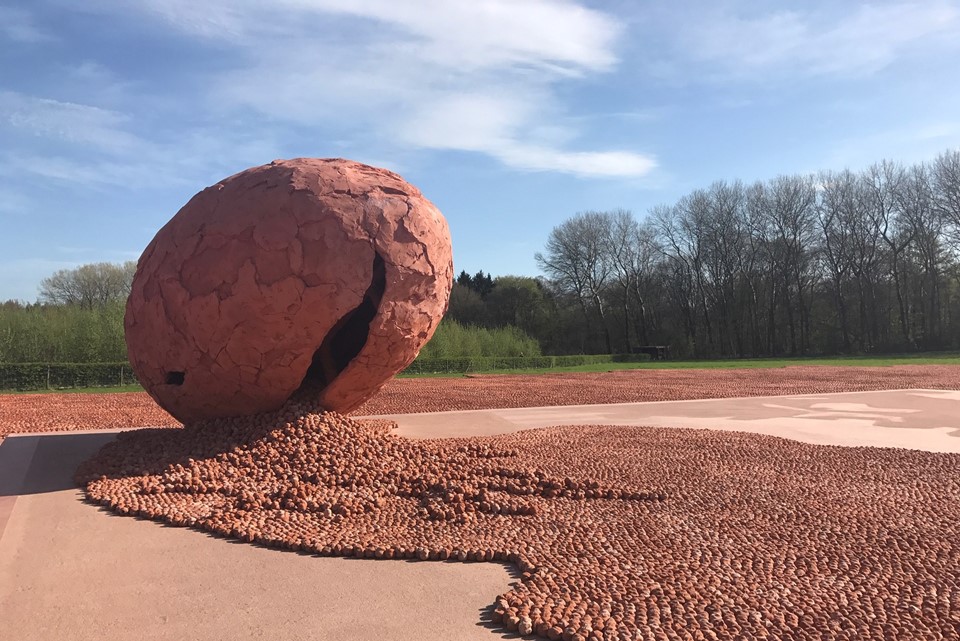 The Embassy would like to sincerely thank our Defences Forces colleagues for their support over Armistice Weekend – without them it would not have been possible to attend all that we did. 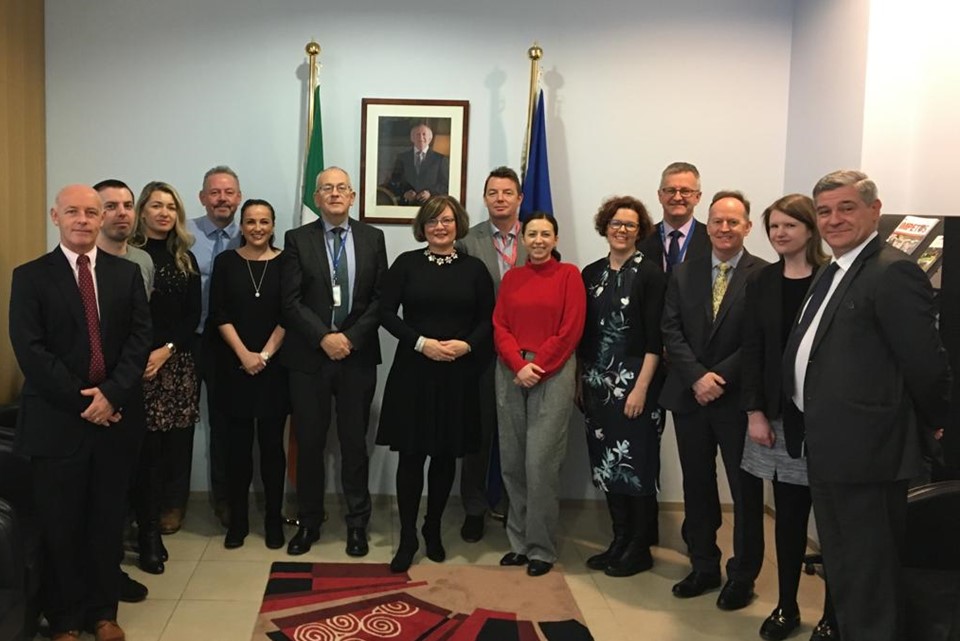