The Queen of Ireland comes to Belgium 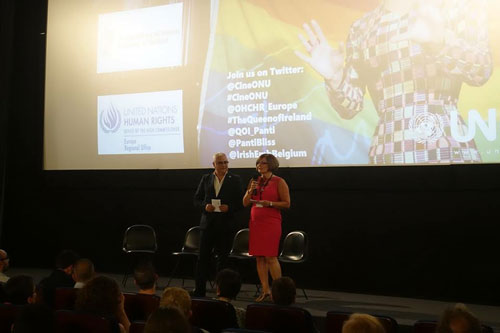 The Embassy of Ireland was delighted to team up with the United Nations to bring ‘The Queen of Ireland’ to Brussels on 22 May, as part of a season of film screenings Ciné-ONU are holding to mark the 70th anniversary of the Universal Declaration of Human Rights.

‘The Queen of Ireland’ follows Rory O’Neill, also known as Panti Bliss, on a journey from Ballinrobe, Co. Mayo to becoming a figurehead for LGBT rights in Ireland, the fight for equality and against homophobia across the world.

Introducing the film to a packed house at Cinéma Galeries in Brussels city centre, Ambassador of Ireland Helena Nolan highlighted that the screening coincided with the 3rd anniversary of Ireland’s historic vote in favour of marriage equality and the 20th anniversary of the Good Friday Agreement referendums. She said, “This is a day of humanity, peace and love”.

The film was followed by a panel discussion, moderated by Carlos Jimenez (United Nations Regional Information Centre), with Rory O'Neill, star of 'The Queen of Ireland', Caroline Mellows, from the Equality Division of Ireland’s Department of Justice and Equality, and Claude Cahn, from the UN Human Rights Regional Office for Europe.

Wow, perhaps one of the most emotive and powerful documentaries we’ve ever screened. Thanks to our partners @OHCHR_Europe and @IrishEmbBelgium, and thanks to our speakers @PantiBliss, Caroline Mellows and Claude Cahn and thanks to @cinemagaleries for having us! #cineONU pic.twitter.com/OHoQ9SqlU9

Rory O’Neill explained that he felt that “minorities should not have to ask the majority for rights” but that the strength of the vote in favour of marriage equality provided validation for Ireland’s LGBT citizens. He said that the process of gay people coming out and being visible is what changed attitudes and has made Ireland a better place.

Caroline Mellows, who is responsible for the development of Ireland’s LGBTI strategy, spoke of the pace of social change in Ireland since the 1990s and outlined why it was necessary for Ireland to put the proposition of marriage equality to the people in a referendum. The result enshrined marriage equality in the Irish Constitution meaning the decision of the people could not then be subject to challenge in the Courts.

Claude Cahn said the result of the referendum was a demonstration of “fairness, decency and equality” by the Irish people and that “the Irish pathway is inspiring but not all countries have that”. He spoke of the need to support minorities in countries where people remain stigmatized and are not free to express themselves.

You can watch a Q&A recorded with Rory O’Neill prior to the screening of ‘The Queen of Ireland’ on the Ciné-ONU Facebook page.

To be informed of film screenings held by the United Nations Regional Information Centre, visit the Ciné-ONU website. The UNRIC has also uploaded some pictures from the night on Flickr.