Born in Scotland in 1924, Mary Tinney spent most of her childhood in Carlingford, Co. Louth and then as a border in St Louis Convent, Monaghan Town. Tinney was an outstanding student and accomplished musician; she studied French and German in UCD, securing a gold medal for oral proficiency in both languages. It is unsurprising given her linguistic skills and academic achievements that she was successful in the Department of External Affairs open competition examinations in 1948. Tinney was just the third woman to enter the department through this process.

Tinney had a varied career, serving abroad in Stockholm, Paris and Strasbourg and in various sections in headquarters at first secretary and counsellor levels. In 1973 she made history as the first Irish female ambassador. She was posted to Sweden and Finland, and in 1976 her appointment was extended to Poland also. There was little public comment on Tinney’s appointment, possibly because of the growing number of women entering the Department of Foreign Affairs at this time. The marriage bar was lifted and Ireland joined the EEC in 1973, broadening the career prospects of professional women. This was in evidence by 1978 when the department appointed it’s first all-female embassy. Tinney headed the Irish embassy in Belgium as ambassador, while Marie Cross and Kathleen White (and later Gillian Davidson) were posted as first and third secretary respectively. 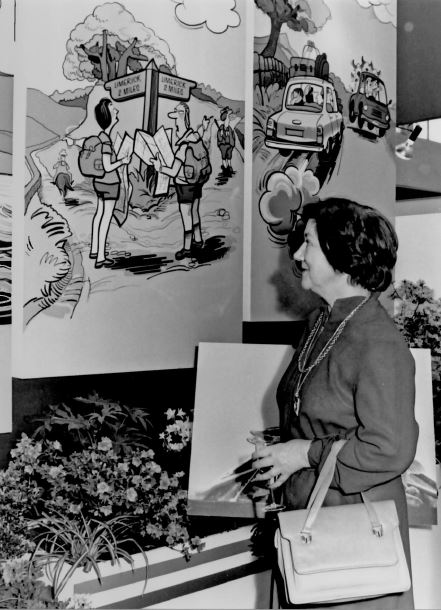 Brussels was an important posting for Tinney. Economically, there was potential for Ireland to expand its business and trade interests in Belgium. Politically, Tinney was at the centre of European policy at a time when there was significant anxiety about possible aggression from the USSR. There was also a widespread need, across all Irish embassies at this time, to present Ireland as a stable political structure against the violence of The Troubles in Northern Ireland. Attention on Northern Ireland in Belgium had piqued since the discovery in Antwerp of an arms cache bound for Ireland in January 1978. It was Tinney’s responsibility to promote the government’s message which rejected violence as a means of bringing political change to the country.

Amid these political challenges Tinney worked the diplomatic circle in Belgium through entertainment and music. As an amateur musician her grand piano accompanied her on all of her postings abroad and she held music nights at the Irish embassy for friends and colleagues. She explained that the job of ambassador was social, ‘in the sense of meeting new people’ and she hosted dinners at the embassy and attended diplomatic functions.

Tinney remained in Belgium until 1985 when she received her last posting as Ambassador to Kenya. Two years later she retired from the department. Despite her success as an official Irish representative, and a career of firsts in the context of her gender, Tinney remained modest about her achievements. She viewed her career as a ‘natural development’; ‘In practice women didn’t get into the Foreign Service at all until the Fifties , and those that entered then have climbed the career ladder and are eligible for ambassadorial posts now.’ Yet her career was extraordinary, not only was she a role model for other female diplomats, but she showed senior officials in the department that women were equally capable as their male colleagues of working for the interests of the Irish state. She was a true trailblazer and it is only right that her achievements should be recognised.

Ann Marie O'Brien holds a BA and Masters from Maynooth University. She graduated in 2017 from the University of Limerick with a PhD in History, which was funded by the Irish Research Council. She has published in Irish Historical Studies and Irish Studies in International Affairs.

Ann Marie is the author of The Ideal Diplomat? Women and Irish Foreign Affairs, 1946-90 published in 2020 by Four Courts Press.

Ambassador Helena Nolan presents an overview of our Visible Women 2020 programme and a seasonal message looking back on an extraordinary year as we look forward to brighter days ahead.

A selection of music and poetry for the festive season.

A report by Miruna Bouros on two events which took place in 2020 on the issue of women, peace and security that were supported by the Embassy of Ireland to Belgium.

Founder and Secretary General of LadyAgri Impact Investment Hub Hilary Barry writes of how the smallest investment in women can have a far reaching and sustainable impact.

Sarah Ironside writes about nearly 40 years as an Irish emigrant, the value of friendship and describes what inspired her decision to bring Darkness into Light to Belgium three years ago.

Historian Dr Antonia Hart highlights how official records have understated the influence of the businesswomen of yesteryear and brings us the story of one famous daughter of an Irishman with a Brussels connection.

Women in diplomacy in changing times

Former Ambassador Marie Cross reflects on her career with the Department of Foreign Affairs, including her posting to the all-female ‘3 man mission’ at the Embassy of Ireland to Belgium in the 1970s.

A look at the work of the Femmes d'Europe Association, a philanthropic non-political, independent organisation based in Belgium and Luxembourg.

A special Bloomsday message from Ambassador Nolan featuring some wonderful Belgian Blooms with thanks to the Irish Theatre Group.

Three Irish films were recognised at an awards ceremony held in Ghent, Belgium, as part of the Scéal Eile Irish Film Festival Belgium.

Embassy of Ireland, Belgium marks St. Brigid's Day 2020 with a celebration of Irish and Belgian female creativity, entrepreneurship and design.