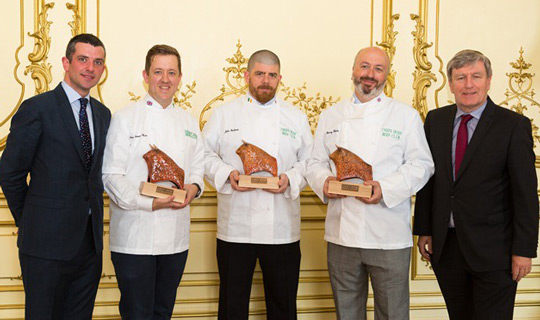 Welcoming the members of the Club and guests, Ambassador Mulhall said that the Chefs’ Irish Beef Club brought together Europe’s leading chefs with a common passion for Irish beef. He highlighted that aside from its wonderful taste, Irish beef was produced from grass fed cattle by farmers who were fully committed to environmentally-sustainable farming practices. So far 32,000 Irish beef farmers had signed up to a Carbon Trust accredited model to reduce their carbon footprint and reduce their overall environmental impact and Ireland was very proud that we were the first country to have such a nationwide plan in place.

Ambassador Mulhall presented three Irish Beef Club members present - Ashley Palmer-Watts, head chef in Dinner by Heston Blumenthal recently voted the fifth best restaurant in the world; Henry Harris, Racine; and, John Cadieux, of Goodmans a bull sculpture by artist Raymond Kinghan, as a token of thanks for their support and use of Irish beef.

· 230,000 jobs in Ireland are linked to the agri-food sector
· In 2013, Ireland exported 470,000 tonnes of beef, valued at €2.1bn
· Ireland is the largest net exporter of beef in the Northern Hemisphere
· The United Kingdom accounts for 42% of total Irish food and drink exports and 52% of Irish beef exports
· Ireland has 4.3m hectares of farmland, nearly 80% of which is devoted to grass production
· There are 130,000 farmers in Ireland, of which 80,000 raise some cattle
· There are 7.2m cattle in Ireland with 2m calves born each year