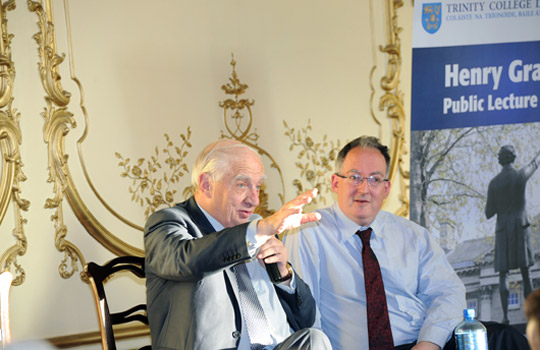 The Embassy hosted a lecture and discussion on the topic of migration as part of the TCD (Trinity College Dublin) Grattan Lecture Series. Peter Sutherland, Special Representative of the Secretary General of the UN for Migration, and Gideon Rachman, Chief Foreign Affairs Columnist, Financial Times, were the guests speakers. The Trinity College Dublin Henry Grattan Lecture Series a flagship initiative of the School of Social Sciences and Philosophy and this event was the second in the series hosted outside Ireland.

Invited guest listened to introductory remarks from the Deputy Ambassador John McCullagh, presentations by the guest speakers and a lively Q&A session moderated by Trinity’s Professor of Economics Professor John O’Hagan. The theme of the event was ‘Migration: Socio-economic and Political Issues and Challenges’. The discussion ranged addressed the recent European Parliament elections, the difference between the perception and the reality of immigration in various Member States, the economic and cultural benefits to a country of immigration, and migration management.