The Minister for Foreign Affairs and Trade, Charles Flanagan T.D., addressed UK and Ireland's relationship with Europe at London's European Council on Foreign Relations on 14 November. 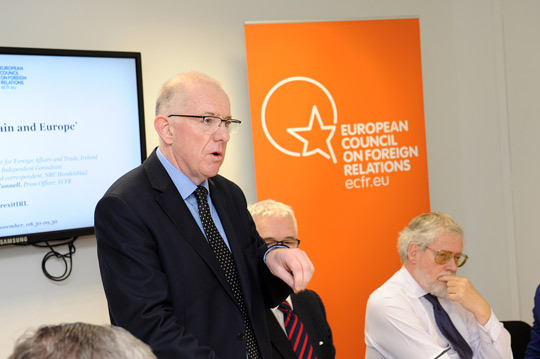 Good morning and thank you all for coming.

It’s been quite a week for anyone interested in the EU. It would have been hard to pick up a British newspaper, or watch British news on TV, over the last few days – and we in Ireland are keen consumers of your media – without being exposed to the debate about European integration and its many facets.

However, the debate can be so consuming that sometimes we can’t see the wood for the trees: the reality is that the EU has been, and continues to be, an essential force for good on our continent and in these islands.

Since the establishment of the European Coal and Steel Community in 1951, then the European Economic Community and subsequently the European Union, there has been unparalleled peace and stability in Europe. That ought to be appreciated here in the UK, which sacrificed so much in two World Wars precisely because of the absence of a settled European order based on law. The role of the EU in bringing about and maintaining that peace and stability should never be underestimated or taken for granted.

The Union has also been essential in creating an open single market of 500 million consumers, and harnessing Europe’s collective strength to help shape the rules of global trade.

But I am not here, before this audience, to catalogue the achievements of the Union.

Nor do I deny for a moment its failures and flaws. In particular, the current stagnation of the euro area has deep economic and social consequences, and helps fuel public anger at the perceived incapacity of mainstream political institutions and parties to improve people’s lives.

We therefore need constantly to review, and review critically, how the Union works and whether it is delivering results.

But for the Irish Government that critical review takes as its starting point the fundamental value and importance of the EU.

On the other hand, we are all too aware that the particular nature of the UK’s relationship with the EU, and how it might be altered, is the subject of intense debate here in Britain.

Ireland’s position on this is unequivocal: we want the UK to remain a full, integral member of the Union.

While I’m fully respectful of and sensitive to the internal democratic reflection underway within the UK, I cannot shy away from this debate. The UK’s continued membership of the EU is hugely important to us and there is too much at stake to remain on the sidelines.

That’s why I want to talk now about two particular themes:

Let me start with how the EU has transformed Ireland.

Shared Irish and British membership of the EU has also been hugely important in improving relations between our two islands, which are now in better shape than at any time in our shared history. Working together side by side within the EU has brought us closer, as we have discovered that there is more that brings us together than we might have first imagined.

Economically, the EU’s single market helps to create British and Irish jobs, boosts British and Irish exports and ultimately fuels British and Irish growth. It’s not surprising therefore, according to the Confederation of British Industry, that nearly 80% of British firms want to stay in the EU. The same would be true in Ireland where there is overwhelming business support for EU membership.

The ties between our two economies, working under this common umbrella, could not be closer. The facts speak for themselves: the UK exports more to Ireland than it does to China, India and Brazil while the UK is Ireland’s largest export market. Together we trade over €1 billion worth of goods and services every week. Over 200,000 jobs, on both sides of the Irish Sea, are estimated to result from our respective exports to one another.

Our businesses deserve much of the credit for this by forging viable and sustainable trading links. But the EU should also be recognised for creating the framework that makes this economic symbiosis secure and equitable.

The impact that EU membership has had on Northern Ireland should not be overlooked either. The EU has been a force for peace and reconciliation, and has provided a framework for cooperation between unionist and nationalist, and between North and South. Through its support, the EU has brought much-needed investment and jobs to the people of Northern Ireland.

The EU provides a platform as well for leadership on a global scale on some of the most difficult and challenging issues, and we appreciate the important role Britain has played whether on climate change or in tackling ebola. The EU is a mechanism too for helping encourage the better development and protection of human rights, democracy and the rule of law across the globe – principles that lie at the heart of both British and Irish foreign policy.

But in the end, of course, it is up to you in Britain to make your own assessment of the costs and benefits for you of EU membership. I urge only that the debate be open and based on the facts.

Now let’s turn to some of the areas where Ireland and the UK work together in the EU, and what we can do to improve it.

The first point I want to make is that other EU Member States understand many of Britain’s concerns and the need to address them.

Indeed, our leaders all agreed on that at the European Council in June when it was made explicitly clear. So while the UK may not always be pushing on an open door when it comes to some aspects of EU reform, it’s certainly not the case that the door is always shut either. In Ireland’s case, we are always ready to consider the merits of pragmatic, sensible proposals that could improve the EU. So are many other countries.

We all share a focus on jobs, investment and growth. I believe our economies will benefit from finding ways to stimulate investment and drive growth across Europe.

Like the UK, Ireland is an exporting nation. We want to improve access to overseas markets and we are working closely with the UK and other partners to make that happen. That’s because we too recognise the enormous potential of new trade and economic agreements – with the US, of course, but also with others such as Canada and Japan – to help re-ignite EU growth.

We also share with you the view that the EU must do more to restore its competitiveness and boost productivity. This will include the completion of the single market in services and further progress in the digital single market. Again, the UK will find a partner and ally in furthering this agenda in its close neighbour and friend across the Irish Sea.

Prime Minister Cameron has said a key British aim will be to liberate European businesses from red tape and overregulation. This is a goal we fully share in Ireland. That’s because we think, as many other of our EU partners do, that the EU “must be big on the big things and small on the small things”. Indeed President Juncker has made it clear that this approach will underpin the new Commission. And he has already made a good start through the appointment of Frans Timmermans as First Vice-President with a special mandate as guardian of subsidiarity and an instruction to strengthen the anti red-tape REFIT programme.

In fact, Ireland and the UK are like-minded on very many issues. In terms of history, culture, language and human ties we are closer to one another than to anybody else in the EU. And, like several other Member States, Ireland sees the UK as a key ally and partner. In fact, the UK is the single most important champion of many of the European policies we support. That is one key reason why we view with dismay the prospect of a UK marginalised within the EU or, still worse, outside it altogether.

Such an outcome could also have substantial practical effects on many areas of our economy, society and public administration. But more than that, it would pull our two countries further apart just as we have been growing closer.

Ireland, therefore, as a close friend and neighbour, will do all it can to create the conditions within which Britain can feel comfortable in the EU.

As I said a moment ago, there is much about the UK’s positive agenda for Europe that we actively support. And there are a number of specific British concerns, such as on the implications of the concept of ever-closer Union, or the role of national parliaments, which we think could be addressed.

But one of the duties of friendship is offering honest advice.

The last thing Europe needs right now is another round of self-absorbed introspection. It would be an unwelcome and energy-sapping distraction, when the focus should be firmly on our economies and on re-connecting with our peoples.

So there is a need to work on areas where we can achieve real reform without complicated treaty change and the legal and political complexities that would entail.

We also need to protect the EU rights and freedoms that our citizens value most. In Ireland, as in other countries, our people value their right to free movement within the Union because it’s given them – as it has given so many British people – the opportunity to work, study, visit and live in other European countries. It has also allowed other Europeans to come to Ireland, where they contribute in so many ways to our economy and our society. This fundamental right is also the corollary of the rights to free movement of goods, capital and services which are so important to the UK and Ireland.

It’s true that the right to free movement can be abused. Such abuses can be legitimately prevented, as the ECJ ruling earlier this week showed. There may be other aspects of the social welfare code which need to be looked at. To take an example, Ireland and Britain have both raised with the Commission the appropriateness of people who work in our countries being able to claim child benefit for children living permanently elsewhere, where such benefits may be much lower.

But to try to place any general limitations on the free movement of EU citizens within the Union would be to strike at a basic principle on which the Union is founded. Equally, I cannot conceive of any way in which such limitations would find the necessary political support around the table.

The warm relationship between the UK and Ireland is one of the great advances of my political lifetime. The respective State Visits by Queen Elizabeth in 2011 and by President Higgins earlier this year reflected the deep friendship that now exists between our two countries. The ties between us, after centuries of hostility, are now strong and resolute.

I believe that the EU’s role in helping to achieve this has been important and has not been properly recognised.

We have worked well together in Europe and there remains much for us to do.

The close ties between our two countries can only be further reinforced by our continuing joint membership of the European Union. Having joined the club together over 41 years ago, it’s my fervent hope that we will continue working side by side within it.