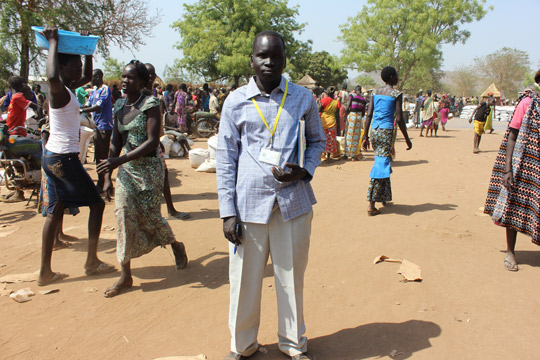 David originally comes from Jonglei State, South Sudan. Now he lives in a refugee settlement in Adjumani District, Uganda, along with 120,000 other refugees. David fled his country because of violence in his village. He tells of how he was forced to run, with his two daughters and three adults. His brother was left behind in the sudden escape, but David is certain he is alive. He says his brother wants to join them in Uganda, but cannot. There is no way to reach here now, David explains, it is too dangerous.

Recalling the days when they fled brings tears to David’s eyes. He reveals, ‘My wife also ran away because of the fighting, but I don’t know where she is. There were dead bodies all around us in the village, so we just had to escape. Many of our neighbours died’.

When David and the small group he traveled with reached Uganda, he explains, ‘UNHCR received us. They gave us clothes, and other basic items. Then, World Food Programme (WFP) gave us food. Other organisations are helping us too’.

David is a nominated leader in his settlement community. He helps to organise the settlement and coordinates the community around the different relief services being provided, including general food distribution from WFP, with support from Irish Aid.

‘Here we don’t hear the gunshots anymore. Our challenge is just that we have little land and can’t grow food. I have been receiving WFP food aid for two years now. I just learned that WFP is funded by others, and we are so grateful for this; it means life for us. WFP has been with us from the beginning’.

When asked if he wants to return to South Sudan, David says no he cannot. His hope for the future is to someday gain an education from here in Uganda. His hope for his people and his country is that peace will come. He relays that a united South Sudan is what is needed. There, he explains, the country is torn apart by tribalism, but here we play and work together as one people.