Visit to Ireland by US Secretary of State John Kerry 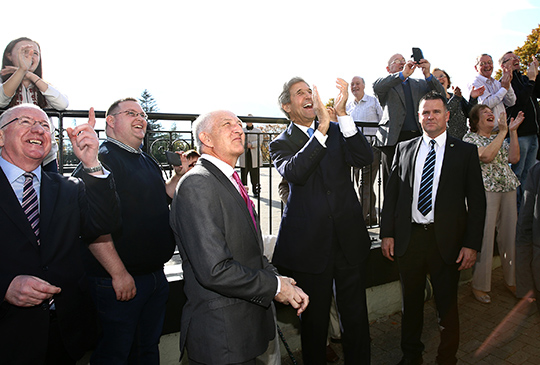 At their meeting, Minister Flanagan briefed Secretary Kerry on developments in the Northern Ireland Peace Process and thanked him for his personal commitment to the process of peace and reconciliation on this island. Secretary Kerry was joined at the meeting by Senator Gary Hart, his Special Envoy for Northern Ireland, whom Minister Flanagan also thanked for his dedication, skill and insight.

Minister Flanagan and Secretary Kerry also discussed the United Kingdom’s decision to leave the European Union. Minister Flanagan reiterated Ireland’s commitment to working closely with its EU partners and with the UK as preparations were put in train for the withdrawal. He also stressed to Secretary Kerry that Ireland remains a committed member of the EU and that we wanted as close a relationship as possible between the UK and the EU in the future.

Minister Flanagan and Secretary Kerry also discussed a number of bilateral issues, including immigration reform in the US, as well as a number of international issues, notably the situation in Syria.