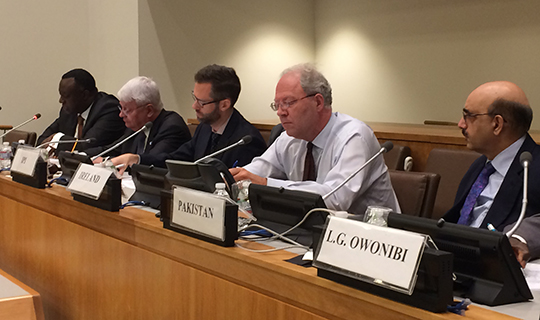 On 3 July, the Mission organised at UN headquarters in New York a well-attended panel discussion on command and control arrangements for UN peacekeeping missions. Speakers included the Under-Secretary-General for Peacekeeping Operations (Hervé Ladsous), two major troop contributors (Rwanda and Pakistan) and Lt.Gen. Joseph Owonibi, former Force Commander of UNMIL (the UN’s peacekeeping operation in Liberia). The main issues considered were: (i) how to ensure decisive leadership of each mission; (ii) how to improve mission planning in relation to command and control; (iii) how to ensure accountability for under-performance on the part of a contingent; and (iv) how to minimise national caveats and restrictions that undermine command authority.

The panel event, which attracted broad representation from member states as well as UN officials and civil society, highlighted the importance of clear and decisive command and control arrangements in the increasingly demanding and dangerous environments into which UN missions are deploying. It also served to assess progress made since the UN’s internal evaluation of this issue in 2012 and to highlight outstanding challenges at the strategic level.  Panellists also identified key strengths in the UN’s command and control arrangements, including the decentralised command structure with light backstopping in New York and the flexible and adaptable nature of the arrangements. A number of challenges at the strategic level were highlighted such as accountability and performance of mission staff; better planning, including improvements in the interface between civilian and military objectives; and the need for a shared understanding of mandates and policies as well as rules of engagement.

Ireland will continue and deepen its engagement with UN peacekeeping policy, and will encourage policy development in specific areas, including by hosting future such events.