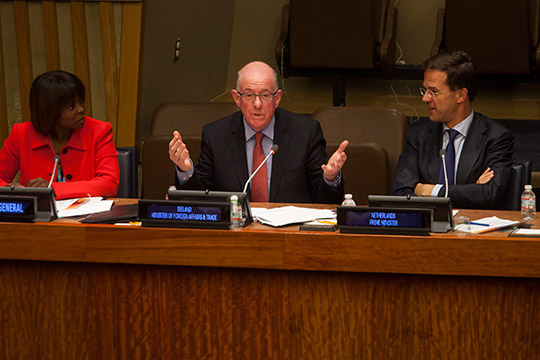 Charles Flanagan, Minister for Foreign Affairs and Trade, Ireland, speaks at the Delivering Zero Hunger at the United Nations

In recognition of Ireland’s leading role on global hunger, Ireland was invited to co-host an event at UNGA 69 on Delivering Zero Hunger – Demonstrating Impact, which is a follow up to the launch of the Zero Hunger Challenge by the UN Secretary General Ban Ki-moon's in June 2012.

The Zero Hunger Challenge is UN Secretary-General’s vision of the eradication of hunger in our lifetimes. It calls for bold, comprehensive actions from all stakeholders to ensure that every man, woman and child realise their Right to Adequate Food. The event convened champions from member states, international organisations, private sector and civil society to showcase actions and announce new commitments for a world with zero hunger

Speakers from across the spectrum – governments, private sector, smallholder farmers and civil society - agreed that eliminating hunger requires investment in agriculture, rural development, decent work, social protection and equality of opportunity. Minister Flanagan emphasised the importance of partnerships and offered “our expertise, our experience and our resources to the fight to end hunger and undernutrition”. He concluded the meeting by signing the Zero Hunger Declaration.

To read more about what Ireland is doing to combat hunger click here. 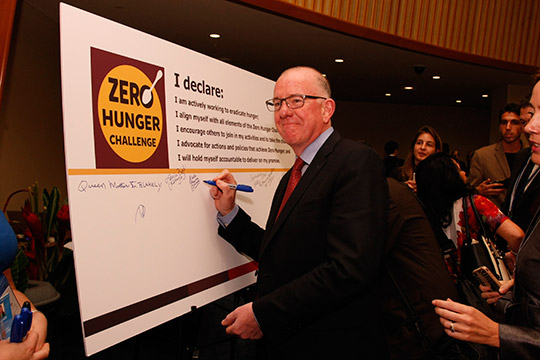 To further Ireland’s goal of supporting greater gender equality, women’s rights and empowerment in the post 2015 development agenda, the mission hosted a meeting during the Leaders’ week of the United Nations General Assembly on Monday, 22 September 2014 entitled “Making it happen-financing gender equality and women’s rights in the post 2015 development agenda. Co-organisers were UN Women, the OECD and the Association for Women’s Rights in Development (AWID).

An audience of more than 75 representatives of government, civil society, philanthropic foundations and bilateral and multilateral development agencies participated in a discussion moderated by the Deputy Executive Director of UN Women, John Hendra and introductory remarks from the Permanent Representative, David Donoghue. Panellists were the Netherlands Special Envoy on Sustainable Development, Jeroen Verheul, Nepal’s Joint Secretary at the Finance Ministry, Baikunta Aryal, the ED of AWID, Lydia Alpizar Duran and Emily Esplen of the OECD. The meeting helped focus attention on the need for a standalone Sustainable Development Goal on gender equality, targets and indicators across all the goals, better data and evidence to provide a foundation on which to focus political will and commitment to close the remaining, significant gaps in gender quality. 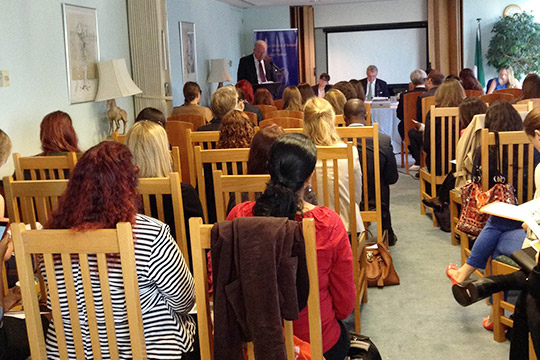 Ireland, together with Sweden, Paraguay, Indonesia, Canada, Benin, UNICEF and child-focussed agencies such as Childfund, organised an event on Thursday which discussed how the post-2015 agenda should address the issue of violence against children. The meeting was opened by Queen Sofia of Sweden who called for children to be put at the heart of the sustainable development agenda. Panellists outlined the various reasons why ending violence against children the post 2015 Sustainable Development Goals should include dedicated targets on ending violence against children, as well as targets which support gender equality, access to quality education and universal health coverage. Ambassador Donoghue highlighted Ireland’s commitment to the protection of children both domestically and through Ireland’s development cooperation programme, Irish Aid and stressed the importance of ensuring that freedom from fear is adequately captured in the post-2015 sustainable development framework. Unicef launched a new report on the prevalence of violence against children while Childfund launched a report which looks at the costs. A meeting note will be made available in the coming weeks.