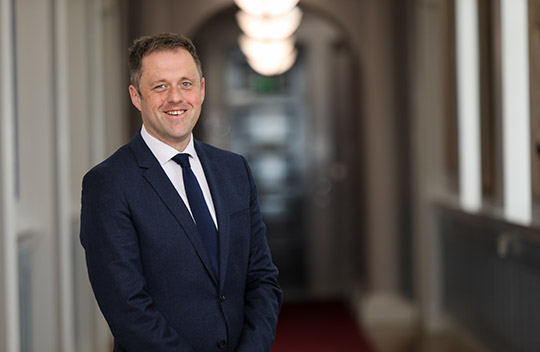 Civil status: Thomas is married to Ann and they have three children together

Thomas was educated at St. Mary’s Diocesan School in Drogheda. He holds an LL.B. Law degree from Trinity College, Dublin. He qualified as a Solicitor in 2001. Thomas completed his apprenticeship with McCann FitzGerald Solicitors in Dublin. After qualifying, he worked in the EU and Competition Law Department in the firm. In 2003, Thomas returned to practice closer to home in Feran & Co. Solicitors until his election to Dáil Éireann in 2007. Thomas also admitted to the New York State Bar.

Thomas was first elected to Dáil Éireann to represent Meath East in 2007. From 2007 to 2011 he was a member of the Oireachtas Committees on Justice, Equality and Defence, Social Protection and on Finance and the Public Service.

In 2011 Thomas was elected to the Seanad for the Cultural and Educational panel. He served as a Senator from 2011 to 2016, during which he was the Party Spokesperson on Public Expenditure and Reform. In 2016 Thomas was again elected to Dáil Éireann. From 2016 to 2020 he served as the Party Spokesperson on Education. In 2020 he was appointed as Minister of State for European Affairs by An Taoiseach Micheál Martin.