On 17 November 2015, following ten weeks of intensive negotiations between the five main political parties in Northern Ireland and the Irish and British Governments, the Fresh Start Agreement was concluded. 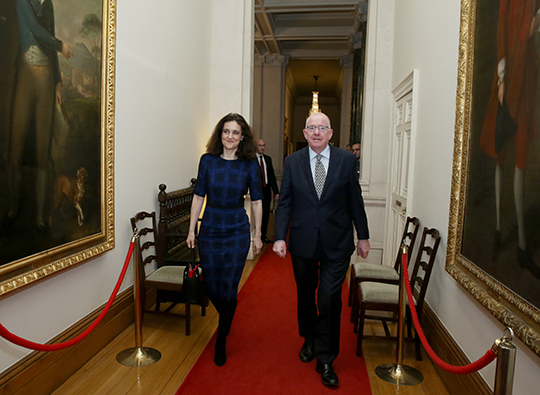 Building on the Stormont House Agreement of December 2014, Fresh Start constituted another significant step towards normalising politics and society in Northern Ireland and consolidating hard won peace for the island of Ireland which was achieved with the 1998 Good Friday Agreement.

The Fresh Start Agreement provides a credible roadmap for the implementation of many aspects of the Stormont House Agreement (including those on parading and flags) and supports the ongoing stability of the devolved power-sharing institutions so that they can deliver for the people of Northern Ireland.

Fresh Start also contains a plan for ending paramilitarism and tackling organised crime, including through the establishment of an international body to report on the achievement of progress towards ending continuing paramilitary activity in Northern Ireland, and the creation of a Joint Agency Task Force to identify strategic priorities for combatting cross-border organised crime and to oversee operational co-ordination.

As part of the Fresh Start Agreement, the Irish Government made a number of additional commitments to funding for important infrastructure projects, such as the A5 road project, as well as for investment in the North West Region, so as to support economic development that creates jobs and prosperity for all citizens.

While it did not prove possible during the negotiations to resolve all of the key issues on the establishment of a new comprehensive institutional framework for dealing with the legacy of the past, as provided for in the Stormont House Agreement, important progress was made.

The two Governments undertook to reflect further on the remaining open issues and on how these could be advanced, while keeping the needs of victims and survivors central to such work. The Governments also reiterated their determination to achieve an agreed basis for the establishment of the institutions dealing with the past to bring whatever healing is possible both for individual victims and survivors and society as a whole.