‌“ … Today, we pay our respect to the memory of all those men whose potential and promise were lost in Gallipoli a century ago.” 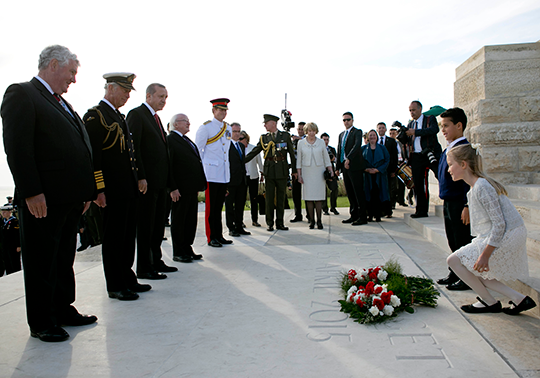 In April 2015, President Michael D. Higgins, accompanied by Minister of Foreign Affairs and Trade Charles Flanagan TD, travelled to Turkey to attend commemorative events marking the centenary of first landing of Allied troops on the Gallipoli peninsula during the First World War.

The Royal Dublin Fusiliers, Royal Munster Fusiliers, Royal Inniskilling Fusiliers, and the 10th (Irish) Division were among the units of the British Army that fought at Gallipoli. While not all soldiers in these units were Irish, it is estimated that at least 3,500 men from across the island of Ireland were amongst those who lost their lives and that several thousand other Irish men were wounded during the campaign.

The Gallipoli landings and the associated battles were commemorated by six ceremonies, including one at Cape Helles on 24th April held to remember the participation of troops from Ireland and from Commonwealth countries.

Alongside the President of Turkey, members of the British Royal Family and other international representatives, President Higgins laid a wreath in memory of all those who died during the Gallipoli Campaign.

The full text of President Higgins’ speech to the Irish Community in Turkey on 23 April 2015 is available at http://www.president.ie/en/media-library/speeches/speech-at-a-reception-for-the-irish-community-in-turkey