UN Summit on Large Movements of Refugees and Migrants 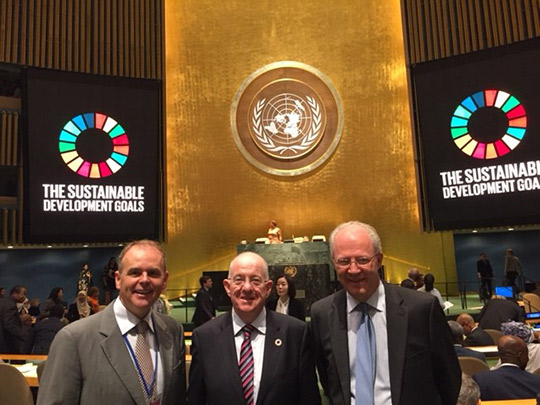 In early 2016, Ireland was asked to co-facilitate the negotiations on the outcome for the UN Summit on Large Movements of Refugees and Migrants. This followed our successful co-facilitation of the process leading to the adoption of the ground –breaking Sustainable Development Goals in 2015, with Ireland’s Ambassador to the United Nations in New York, David Donoghue, once again asked to lead on negotiations, which took place over six months from March to August of 2016. The Summit was held on 19 September 2016 at the UN in New York.

UN Secretary-General Ban Ki-moon had called for this Summit in response to the current large movements of migrants and refugees on a scale not seen since the aftermath of the Second World War. Recognising the enormous difficulties and challenges inherent in this situation, and in the absence of any agreed international response, Ban Ki-moon saw the Summit as a watershed moment to strengthen governance of international migration and a unique opportunity for creating a more responsible, predictable system for responding to large movements of refugees and migrants.

On 19th September, 193 UN Member States adopted by consensus the outcome document that Ireland had negotiated. They agreed to to come up with a blueprint for a better international response, which would clearly reaffirm the centrality of the already existing legal and normative framework relating to refugees and migrants and commit to its implementation. More significantly all UN Member States agreed, for the first time ever, to negotiate Global Compacts on Refugees and on Migration by 2018. They acknowledged that current efforts are inadequate; that there is a need to share the responsibility to protect and assist refugees; and that the protection regime is chronically underfunded.

The processes to agree these Global Compacts on Refugees and on Migration are currently under way and Ireland will continue to play an active role in them as a UN and EU Member State.