Treaty on Prohibition of Nuclear Weapons 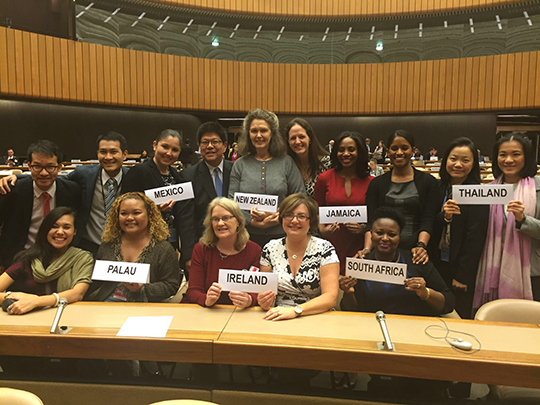 In October 2016, Ireland led an historic vote at the United Nations resulting in the convening of a ground-breaking diplomatic conference to negotiate a new legal instrument for the prohibition of nuclear weapons, leading towards their total elimination. We are committed to this process due to our increased understanding of the devastating consequences of these weapons, the inadequacy of any possible humanitarian response and the need for urgent action due to the increased risk of a nuclear weapon detonation, either deliberate or by accident.

This conference represented the first multilateral nuclear disarmament negotiations in over twenty years and was an important step towards the fulfilment of commitments made under the existing Nuclear Non-Proliferation Treaty (NPT) and the shared goal of achieving a world free from nuclear weapons. The negotiations aimed for the broadest possible level of agreement and are open to all states, civil society partners and international organisations.

It was agreed that the conference would take its mandate from a Resolution adopted by 123 UN Member States which was brought forward by Ireland together with five key partners; Austria, Brazil, Mexico, Nigeria and South Africa. Ireland was also actively engaged in a working group on “Taking Forward Multilateral Disarmament Negotiations” and three conferences on the humanitarian consequences of nuclear weapons which together provided additional impetus for progress. Our involvement in this process also occurred in fulfilment of our commitments under the UN Sustainable Development Goals.

One particular issue to which Ireland drew attention is the disproportionate effect of ionising radiation on women and girls, as well as the need for greater female empowerment in disarmament discussions. Historically, nuclear disarmament has been a priority for the Irish Government and our efforts in this area were recognised when Ireland was the first country invited to sign the NPT. Ireland continues to be a respected voice on disarmament and non-proliferation issues and our current team are proud to continue in this strong tradition.