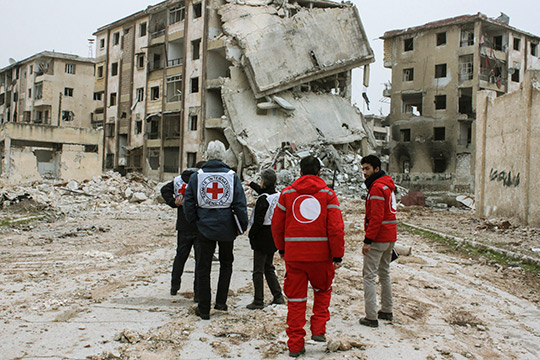 In 2016, 130 million people worldwide were in need of humanitarian assistance and 65 million people were displaced from their homes due to ongoing violence, conflict and natural disasters. Irish Aid, the Irish Government’s overseas aid programme, worked on behalf of Irish people to save and protect lives, reduce suffering and maintain human dignity, by meeting urgent needs in some of the world’s poorest countries.

The total humanitarian assistance delivered by Ireland in 2016 was over €190 million. This assistance was delivered on the ground by our partners – United Nations agencies, the International Red Cross and Red Crescent Movement, and non-governmental organisations – who can ensure that humanitarian supplies and services reach the places where and when they are most needed.

Last year, a significant amount of Ireland’s humanitarian assistance was directed to the situation in Syria where ongoing conflict has resulted in a devastating humanitarian crisis. Over 13 million people are in need of urgent, life-saving aid and protection, and millions have been forced to leave their homes.

Thanks to the continued support of the Irish people, Irish Aid delivered over €25 million in humanitarian assistance to the Syrian people in 2016, bringing Ireland’s total funding to those affected by the conflict in Syria to €67.5 million since 2012.

In 2016, we also provided significant humanitarian assistance of over €22 million to countries in the Horn of Africa, where people’s lives continue to be critically affected by ongoing violence and severe food shortages.

Ireland is particularly committed to providing humanitarian assistance to “forgotten crises”, which do not always make the news headlines. Last year we responded to the dire humanitarian situation of people in Iraq and Yemen, and provided support to those affected by Hurricane Matthew in Haiti in October 2016.

A central feature of Ireland’s overseas humanitarian assistance programme is the Rapid Response Initiative. 37 Rapid Responders were sent by Irish Aid to support specific humanitarian needs in 20 countries, and some 357 tonnes of emergency relief supplies, such as tents, water containers, hygiene kits and tools, were airlifted to meet urgent needs across the globe.

Find out more about the Rapid Response Initiative