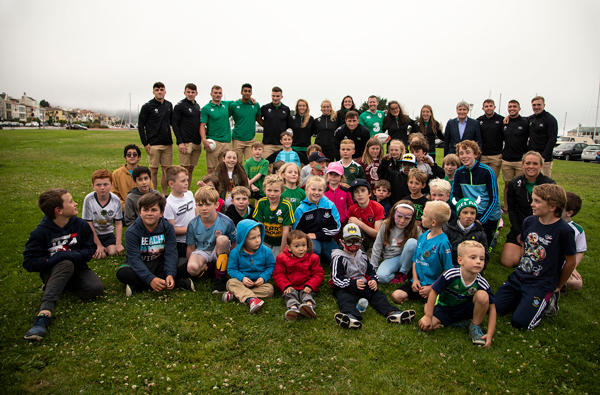 An enthusiastic welcome from the children of the Irish community in San Francisco. Ireland’s Ambassador to the United States, Dan Mulhall and Consul General Robert O’Driscoll flanked by players of Ireland’s Rugby 7’s teams.

The Ambassador of Ireland to the United States, Dan Mulhall, and his wife Greta Mulhall, visited Northern California in July for a full program of meetings and events with community organizations, political leaders and businesses across the Bay Area and Sacramento.

The visit was timely coming on foot of the decision by the Government of Ireland to open a second Consulate in California, situated in Los Angeles, as part of the new Global Ireland strategy which seeks to double the impact of Ireland’s global footprint by 2025. The new Consulate in Los Angeles is due to open in 2019 and will work to further deepen the already strong linkages between Ireland and California. California is Ireland’s largest trade and investment partner in the US and our mutually beneficial economic relationship is supported by Ireland’s economic agencies which operate in the state, Enterprise Ireland and IDA Ireland. 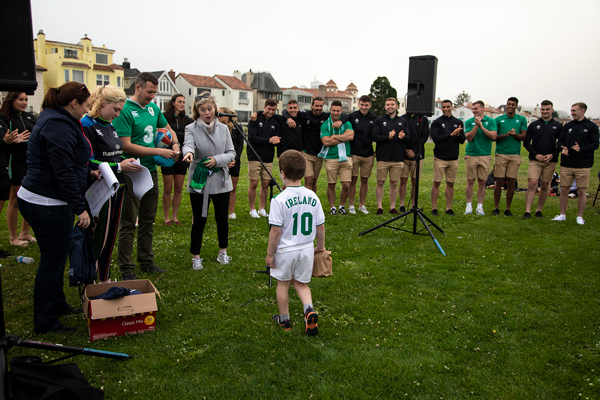 A young #10 winner of a raffle prize given out by Celine Kennelly.

The Ambassador’s visit coincided with the participation of Ireland’s men’s and women’s national rugby sevens teams in the 2018 Rugby World Cup Sevens in San Francisco at AT&T Park, the home of the San Francisco Giants. The tournament was the first international rugby tournament hosted by the United States and both Irish teams performed admirably with the women’s team notching a sixth place finish and the men’s team winning the Challenge Cup and finishing 9th overall.

The visit began with an evening of events to celebrate the Rugby World Cup Sevens. A welcome event for the two teams was co-organised by the Irish Immigration and Pastoral Center and the Consulate. The IRFU’s executive team including President Ian McIlrath were in attendance, as was the Co-Chair of the Irish Caucus in the California State Legislature, Assembly member Kevin Mullin.

Over 250 people attended and had the opportunity to meet the Irish teams, the Ambassador and have photos taken. The San Francisco Firefighters, Local 798 did a fabulous job providing a feast for the crowd from their BBQ truck. The San Francisco Police Department cadets were on hand with stickers and the children had the chance to hop into a police car and welcome the teams with the sirens! There were games, face painting, and prizes for all.

The teams received a rousing welcome and could feel the excitement and support from the local San Francisco Irish community wishing them great success at the Rugby World 7’s at AT&T Park. 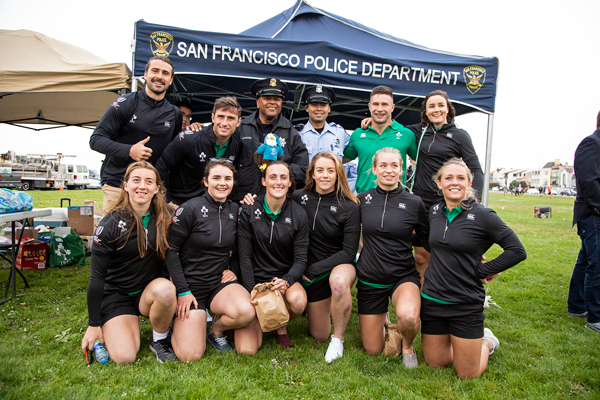 (Front, right), Executive Director of the IIPC and Consul General Robert O’Driscoll as Team Ireland looks on. (R) SFPD with some of the Ireland Rugby 7’s World Cup players.

Day two started with the Consulate opening its doors to 50 Irish-American community leaders for breakfast in honour of the Ambassador’s visit. The Ambassador’s remarks reflected on the incredible contribution that the diaspora in the Bay area make in maintaining links with Ireland – some 8,000km away. 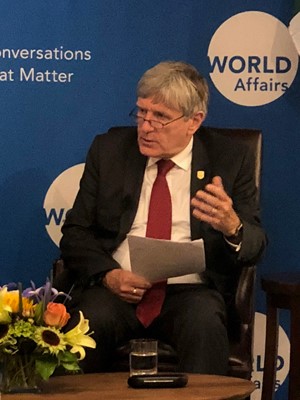 The Ambassador had a program of business meetings and in the afternoon addressed the World Affairs Council as part of their “Diplomat Luncheon” series. The Ambassador discussed Ireland’s optimism for the future, the UK’s decision to leave the EU, and Northern Ireland to a sold out luncheon crowd. 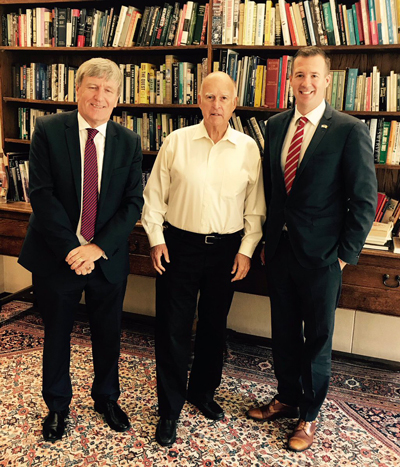 Day three started with an early morning trip to the California State Capital to meet with Governor of the State of California, Jerry Brown with much of the discussion focused on the strong relationship between Ireland and California, and the upcoming Global Climate Summit being organised by the Governor’s Office.

Upon their return to San Francisco, the Ambassador was hosted to lunch with the board of the Irish Immigration and Pastoral Center (IIPC). The IIPC is receives support from the Department of Foreign Affairs’ Emigrant Support Fund and deliver a range of important services and supports to the Irish and Irish American community in the Bay Area.

The highlight of the penultimate day of the Ambassador’s visit was a visit to San Francisco City hall where he was greeted by the newly elected Mayor of San Francisco, London Breed. Accompanying the Ambassador in meeting with the Mayor were members of the Executive Board of the San Francisco – Cork Sister City Committee, Seán Keighran, Diarmuid Philpott and Jim Herlihy as well as the Consul General. 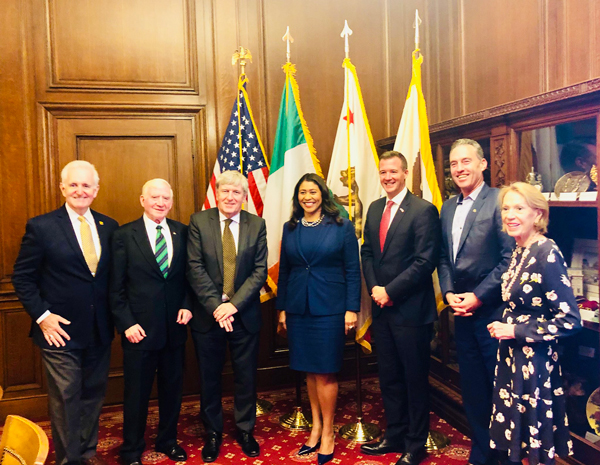 Reflecting the close Irish ties with UC Berkeley, the Ambassador visited with Irish academics at the university. The Ambassador was met by UC Berkeley Associate Professor for English, Catherine Flynn and toured the Bancroft Library, one of the largest collection of Irish papers in Western US including material on the community here and also notable academics such as Seamus Heaney.

The Ambassador’s program concluded with a sombre occasion at the unveiling of a new memorial plaque to the six Irish and Irish-American students who died so tragically in Berkeley in June 2015. The Ambassador was co-host of this event, along with the Mayor of Berkeley, Jesse Arreguin. Following the unveiling there was a community reception for approximately 100 people The Ambassador noted the Government of Ireland’s on-going commitment to supporting Jackie Donohoe, the Mother of Ashley Donohoe who died in the balcony collapse to bring legislative change to ensure that the tragedy can never be repeated. 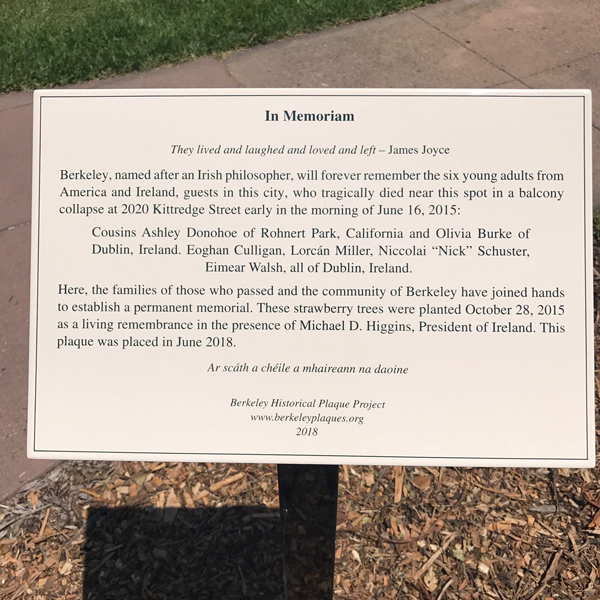 Change in operations of public office in response to 'Shelter in Place' ordinance.

NOTICE: Information and Advice on COVID 19

The Consulate General of Ireland in San Francisco is accepting applications for the Promotion and Outreach fund, which is used to promote Ireland’s interests in the Western United States[1]. The fund provides modest levels of financial support (up to $1500 USD) for events and activities in 2020.

Travel Information for those travelling to the International Friendly Women's Soccer - Republic of Ireland vs. USA in Pasadena, California Saturday, August 3, 2019.

On 7 May 2018, a truly memorable event took place at the Olympic Club in San Francisco to celebrate the 20th anniversary of the Good Friday Agreement, signed in Belfast on 10 April 1998.

These competitions are now closed.