Once again, Vienna will play host to the annual St Patrick’s Day Parade, this year on Saturday, 19th March. This will be followed by an afternoon of Irish music and dance, as well as children's activities 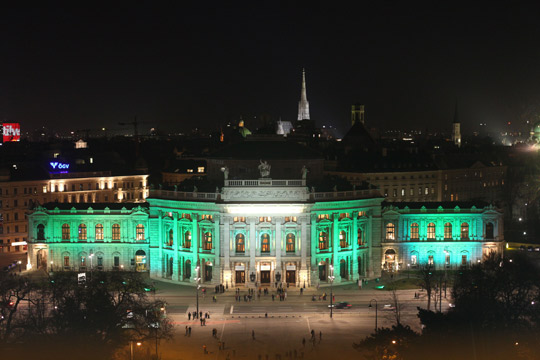 As usual, the day begins with the annual St Patrick's Day Mass in the Schottenstift. Following the Mass, the parade will commence outside the Schottenstift. We will congregate at 11:45, and march up Schottengasse, across Schottentor, past the Votivkirche and into the University Campus. We are delighted to announce that amongst others, the Irish Dance Schools in Vienna, the Wiener Netze Blasorchester, the Vienna Pipes and Drums, Irish Setters and Wolfhounds, and the Vienna Gaels will all be marching alongside Embassy staff and the Austro-Irish Society to celebrate.

Following the parade, the annual celebrations will take place in Stiegl Ambulanz, in the University Campus (Altes AKH). There will be Irish food and beer, music and dance performances, and various other activities for children old and young, including a Gaelic football display organised by the Vienna GAA. The afternoon's events are of course completely free of charge and open to the public.

Furthermore, various Viennese landmarks will be lit up green again this year, including the Riesenrad, the Burgtheater and the bridges along the Donaukanal. If you would like to be involved in this, please do get in touch.