Ireland: A champion of accountability and justice for victims of international crimes 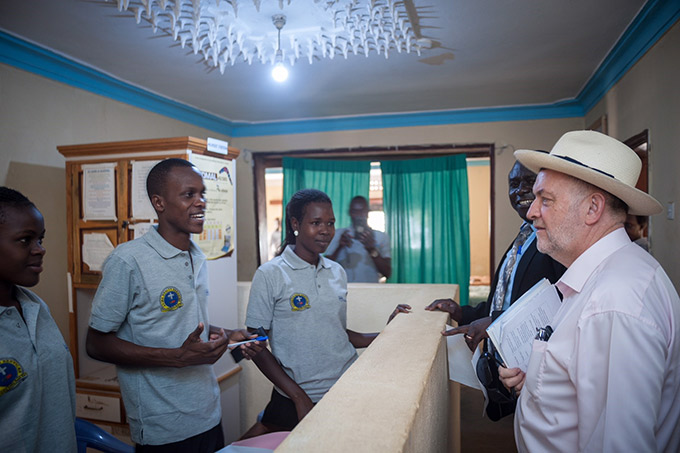 The Embassy of Ireland in Uganda this week hosted a high-level visit to monitor the work of the Trust Fund for Victims (TFV), the fund created alongside the International Criminal Court (ICC) to ensure the rights of victims of war crimes and crimes against humanity brought before the ICC.

The Trust Fund has been working in Northern Uganda since 2008 in response to the conflict between the rebel group, the Lord's Resistance Army, and the Government of Uganda. Over 45,000 victims of crimes, and over 200,000 family and community members, have since been assisted with medical rehabilitation, psychological rehabilitation and livelihood support.

Initiated by the Embassies of Ireland in Kampala and The Hague, the visit attracted participation from the President of the management body of the ICC, the Assembly of States Parties, alongside board members of the Trust Fund for Victims and Ambassadors of various countries to both The Hague and Kampala.

While in Northern Uganda, the monitoring team visited a number of agencies and partners and had the opportunity to see first hand the impact of the Trust Fund across a variety of areas. In Gulu, the team met with the Association of Volunteers in International Service, who provide medical rehabilitation to disabled victims of war through provision of prosthetics, orthotics and physiotherapy, and with the Centre for Victims of Torture, who provide mental health services for survivors of LRA-inflicted torture and violent trauma.

In Lira, the team met with Ayira Health Services, providers of physical and psychological rehabilitation services for victim survivors of war, who work with the community to empower and promote victim survivors.

The monitoring team also had an opportunity to listen to the stories of the survivors and hear how the Trust Fund for Victims has brought about real change in their lives. Many spoke of the hopelessness they faced as victims and how their hope has been restored through physical and psychological rehabilitation. They have been enabled to now play an active part in their communities and are once again accepted.

Reflecting on the monitoring visit, Ambassador O'Brien highlighted the important role that the Trust Fund plays, "Each time war crimes or crimes against humanity are perpetrated, there are victims who must not be forgotten, victims for whom justice needs to be delivered, and victims who need to be supported to rebuild their lives with dignity. The Trust Fund for Victims is restoring the dignity and rights of victims".

Concluding their monitoring visit, the team was in agreement that the Trust Fund is delivering strongly on its mandate to provide assistance and healing services to victims who have suffered harm from the most serious international crimes, and to deliver reparations to victims and their communities.