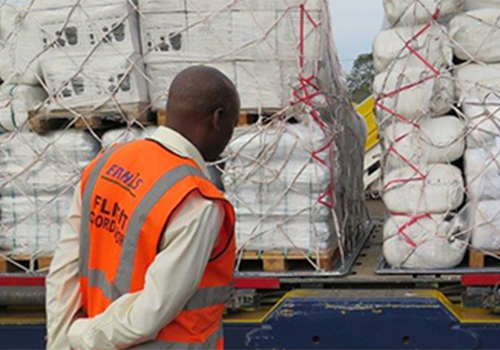 Irish Aid, the Irish Government’s programme for overseas development, covered the costs of two separate airlifts to Uganda – one from Dubai on the 11th of June and another one from Accra today. The UN Refugee Agency, UNHCR, received the supplies at Entebbe International Airport and will distribute them to South Sudanese refugees in Uganda’s districts of Arua and Lamwo.

This support comes at a critical time, with around 2,000 South Sudanese refugees arriving in Uganda daily since July 2016, when a new conflict erupted in Juba and quickly spread to other parts of the country. The fighting has continued to drive people from their homes across the border into Uganda, which now hosts more than 1.2 million refugees – 960,000 from South Sudan alone. Despite the pressure of this unprecedented influx, Uganda has maintained its refugee welcoming policy, keeping its borders open and continuing to provide refugees with land, shelter, freedom of movement and access to services.

The people of Ireland have continued to offer support to the South Sudanese refugees in Uganda, and have provided €3 million in lifesaving assistance in 2016, including €1,114,000 to UNHCR.

“We are so grateful to the Irish people for showing solidarity with refugees,” says Bornwell Kantande, UNHCR Representative in Uganda. “Such display of generosity clearly signals that Ireland stands with Uganda and the communities who have opened their doors and hearts to men, women and children fleeing conflict and violence in their home countries.”

UNHCR leads and co-ordinates international action to protect refugees and resolve refugee problems worldwide. Its primary purpose is to safeguard the rights and well-being of refugees. Today, a staff of more than 9,300 people in 123 countries continues to help and protect millions of refugees, returnees, internally displaced and stateless people. In Uganda, UNHCR provides protection and humanitarian assistance to more than 1.25 million refugees in coordination with the Government of Uganda and partners.

Irish Aid is the Irish Government’s programme for overseas development. The programme is managed by the Development Co-operation Division of the Department of Foreign Affairs and Trade. The work we do in fighting global poverty and hunger is integral to Ireland’s foreign policy. Irish Aid has been working in Uganda for 23 years. It’s current Country Strategy Paper (CSP) runs from 2016-2020 and has a strong focus on Karamoja and support to the Humanitarian Response in Uganda