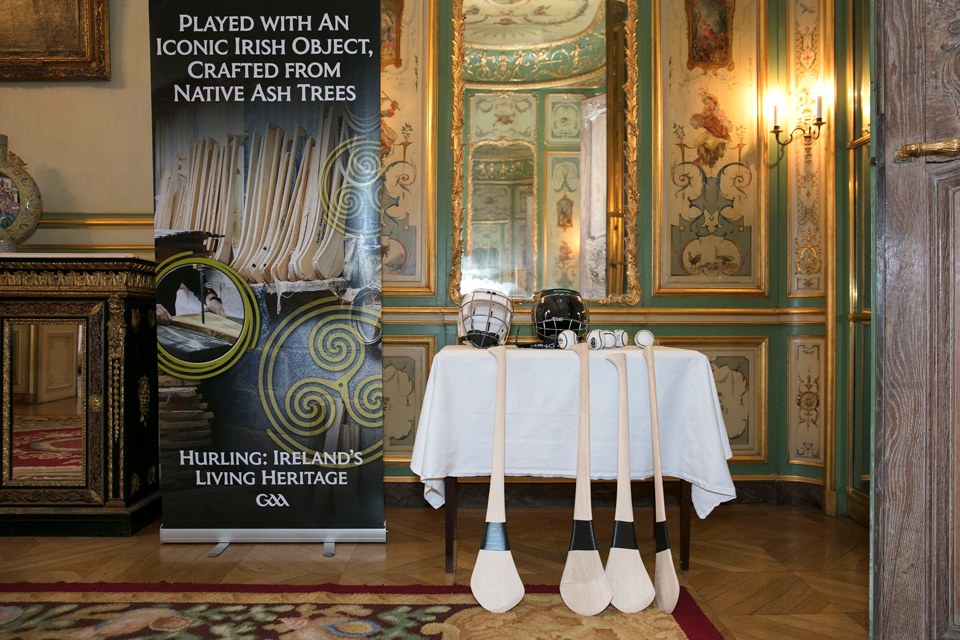 Earlier today in Port Louis, Mauritius at the UNESCO 13th session of the Intergovernmental Committee for the Safeguarding of the Intangible Cultural Heritage, Ireland’s second application – Hurling, which includes the game of Camogie – was approved for inscription on the Representative List.

In his statement President Higgins said ‘This decision is a global acknowledgement of the unique cultural significance of this part of our national culture, and of the important role Gaelic games play in Irish society. It is, too, a tribute to the Gaelic sports associations, whose work and volunteering ethos form the beating hearts of so many communities all over the island of Ireland, and further afield, as Gaelic games are now played on every continent. Most of all, UNESCO’s decision highlights yet again that team spirit, respect for skill excellence and creativity are at the heart of Irish society, and that our cultural heritage is worth protecting and celebrating’.

Minister for Culture, Heritage and the Gaeltacht Josepha Madigan T.D today released a statement saying ‘Hurling is a key element of Irish culture. For centuries, hurling has been an important part of the Irish identity, with men and women passing on this living tradition to each rising generation. I am grateful to the Camogie Association and the GAA for their work with my Department to achieve this UNESCO recognition. The inscription of Hurling is a wonderful opportunity to share a cherished aspect of Irish culture with others’.

Ambassador Dermot Nolan and the Permanent Representation of Ireland to UNESCO congratulate all involved for bringing the culture, heritage and enjoyment of the game of Hurling, to the world stage. Hurling forms the backbone of communities both at home and abroad and holds a very special place in the lives of many Irish men and women.  We welcome the decision today as an affirmation of the value of Hurling and its place as an intangible element of Irish cultural heritage.  The recognition of Hurling on the UNESCO representative list will bring greater awareness, knowledge and appreciation of this ancient sport to a wider audience and will ensure the safeguarding of Hurling as a vital part of Ireland’s living heritage.

The Department of Culture, Heritage and the Gaeltacht and the GAA and Camogie Association put in a huge effort to achieve this inscription, which the Permanent Representation of Ireland to UNESCO was honoured to assist.   UNESCO ambassadors were only last month given a taste of the part played by Hurling and Camogie in Irish life at an exposition in the Embassy of Ireland Embassy in Paris, hosted by the Minister for Culture, Heritage and the Gaeltacht, Ms Josepha Madigan T.D, together with Irish Ambassador to France Patricia O’Brien and Ambassador Dermot Nolan.  The Permanent Representation of Ireland to UNESCO would like to extend our sincerest thanks to those who have made this inscription a reality.

The Permanent Representation of Ireland to UNESCO is pleased to see that another integral part of Ireland’s cultural heritage which is valued, enjoyed and shared throughout Ireland and the rest of the world, is being recognised with its inscription on the Representative List of the Intangible Cultural Heritage of Humanity.