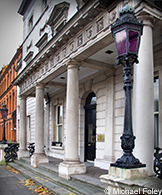 Our role and policies

The Board meets fortnightly, or more frequently as required. Other Departmental officials attend MB meetings periodically to brief and participate in discussions on topical developments in their areas of responsibility.

The MB also meets periodically with the Minister for Foreign Affairs and Trade and the Department's Ministers of State to consider strategic policy and management direction. Such meetings are in addition to on-going interaction between Ministers, members of the MB and other senior officials.

The current members of the Board are:

Our role and policies