Permanent Representation of Ireland to the Council of Europe, Strasbourg

Working at Ireland’s Representation to the Council of Europe is an immensely rewarding experience for any Irish diplomat.

Located in Strasbourg, the Council of Europe is perhaps not as well-known as the European Union or the United Nations. However, it plays a very important role as the guardian of the principles of human rights, democracy and the rule of law across Europe. Its 47 members cover the entire continent, from Iceland to Azerbaijan, all working together to defend and promote our common values.

The work of the Representation differs from that of many other Irish Embassies in that as a multilateral Mission, we focus exclusively on work of the Council of Europe rather than on Ireland’s relations with an individual country.

2015 began with a visit to Strasbourg in January by President Higgins, where he delivered a very well-received speech at the Council on the subject of “The Future of Parliaments”.

Throughout the year, the focus of our work was on the European Convention on Human Rights and the associated European Court of Human Rights. Promotion of human rights internationally is a cornerstone of Irish foreign policy and I have been particularly honoured to play a part in making these aspirations a reality.

My own particular role as Ireland’s the Deputy Permanent Representative involved helping to ensure that the European Convention on Human Rights is operating as it should. I also worked with other delegations to monitor how Member States implement judgements issued by the European Court of Human Rights.

We have also worked on a range of other issues, including the Council’s responses to the threat of terrorism and to ongoing political crises in Europe, as well as the strengthening of democratic institutions in Member States. 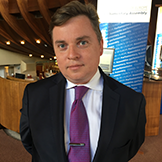 Permanent Representation of Ireland to the Council of Europe, Strasbourg

Department of Foreign Affairs and Trade