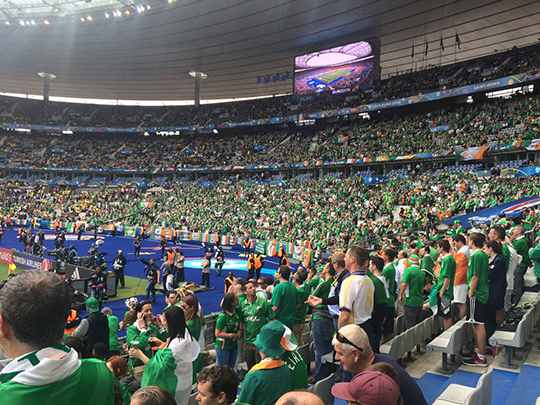 Ireland’s participation in the European Football Championships (Euro2016) brought 100,000 Ireland fans to France at a time when that country was subject to a national state of emergency following a series of terrorist attacks.

This was one of the largest and most complex consular operations the Department has ever undertaken. The significant level of work involved, and particularly by the HQ Consular Directorate and the team at the Irish Embassy in Paris, was acknowledged when the Department was awarded the 2016 Civil Service Excellence Award for Customer Service for ensuring that travelling Irish fans were kept well-informed and safe and that support was there for them throughout as needed.

A working group involving also the FAI and An Garda Síochána was established to coordinate on crisis planning and communicating key messages to the travelling public. Steps taken included the distribution of flyers at friendly matches in Dublin and in Cork before the tournament began and through airlines, tour operators, airports, ferry ports, Irish bars and fanzones in France. These provided travel tips, a list of consular services available to Irish citizens and details of Consular helpline numbers. In addition to extensive use of social media and web platforms, the Department also incorporated other new technologies and tools, such as the TravelWise app, to engage with Irish citizens in innovative and dynamic ways.

The Department’s priority at all times was to make certain that all appropriate measures were in place to ensure that Irish citizens attending Euro 2016 stayed safe.  This included a consular ‘hub’ at Embassy Paris which operated 24/7 during Ireland’s participation in the tournament and the establishment of temporary “pop-up” Consulates in Bordeaux, Lille and Lyon.

With the Republic of Ireland and the Northern Ireland teams both making it through to the tournament’s knockout stages, Irish fans, as always, projected a very positive and colourful image of Ireland abroad. The Department’s extensive public information campaign was well-received by Irish fans who were awarded a medal from the City of Paris as the best fans of the tournament for their respect and cooperation with police and the authorities in France.

The experience of Euro2016 has generated massive learning and efficiencies for the Department’s handling of major events that involve large numbers of Irish citizens travelling abroad.