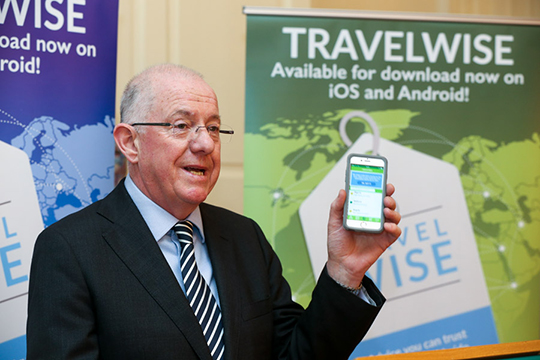 The development of TravelWise puts the Irish Department of Foreign Affairs and Trade at the top of the class internationally in terms of our ability to provide real-time information and advice to Irish citizens, and to interact and communicate instantly in the event of an emergency situation. It has become one of the most popular government-issued travel apps, with 15,000 downloads to date and nearly 500,000 screen views since its launch. It is also the highest-rated app of its kind, achieving an average score of 4.6 on Android and 4/5 on iOS. The app was also selected as overall winner in the Mobile category at the 2017 Ireland eGovernment Awards.

Increasing numbers of Irish people travel abroad - more than 7 million trips were undertaken in 2016 – and an increasing proportion of those travel to higher risk locations. The changing global security context also means that the demand for information and support is higher.

TravelWise was developed to help Irish people to stay safe and informed whether they are travelling or living abroad. By allowing users to customise alerts for their location or future destinations, it tailors itself to the needs of individuals. With travel advice for 200 countries presented in a user-friendly format which can be accessed offline, it means that emergency contacts for our global network of Irish Embassies and Consulates are always in your pocket, with no need for roaming charges.

In addition to travel advice, TravelWise allows citizens to get push notifications for security and other updates in the countries they select, all direct to their smartphone. Two-way communication and feedback to the Department is encouraged and the offline availability of Embassy/Consulate and emergency contact details ensures that citizens can access the information they need when they need it most.

To download TravelWise visit the App Store or Google Play.