Ireland’s first National Action Plan was launched on 25th November 2011 at the Annual Seminar of the Joint Consortium on Gender-Based Violence by the Tánaiste and Minister for Foreign Affairs and Trade, Eamon Gilmore, and former President Mary Robinson.

The actions of the first plan spanned from 2011-2014 and focused on how Ireland could best promote and implement the objectives of United Nations Security Council 1325 through its programme-support activities, diplomatic advocacy and policy-making across the areas of peace, security and development.

The Plan was based on Five Pillars:

The Plan aimed to: 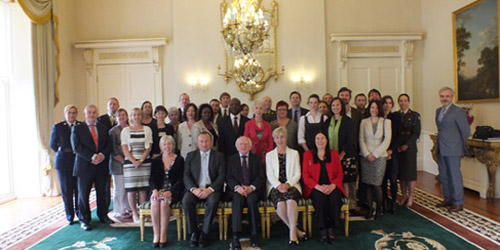 Ireland’s first National Action Plan on UNSCR 1325 established a Monitoring Group tasked with overseeing the implementation of its commitments. In keeping in the spirit of an open consultation process, the Monitoring Group was chaired by former Government Minister Liz McManus, and drew its membership from an equal split of Government agencies with responsibility of much of the actions in the Plan, and civil society and academia with relevant experience in Women, Peace and Security.

An independently written Final Evaluation of the Implementation of Ireland’s National Action Plan on UNSCR 1325 on Women, Peace and Security (2011-2014) provided an in-depth assessment of the three-year lifespan of the first NAP. Actions were measured against outcomes and impacts, in a process that helped inform and reorient the development of Ireland’s second National Action Plan on Women, peace and Security.

The report was compiled by independent Gender Consultant Karen McMinn, and involved extensive interviews with implementing agencies, NGOs and Officers from the Department of Foreign Affairs and Trade as the drafters of the National Action Plan.