Visit by the President of Mozambique

President Guebuza of Mozambique visited Ireland from 3-6 June 2014. This official state visit highlighted the value of Ireland and Mozambique’s bilateral relationship, and Ireland’s commitment to continue working in partnership with the South East African country.

While visiting Ireland, President Guebuza met with officials from third level institutions, Irish businesses and development organisations that engage with Mozambique on an ongoing basis.

The State Visit began with a formal welcome ceremony at Áras an Uachtaráin when President Guebuza was greeted by President and Sabina Higgins. 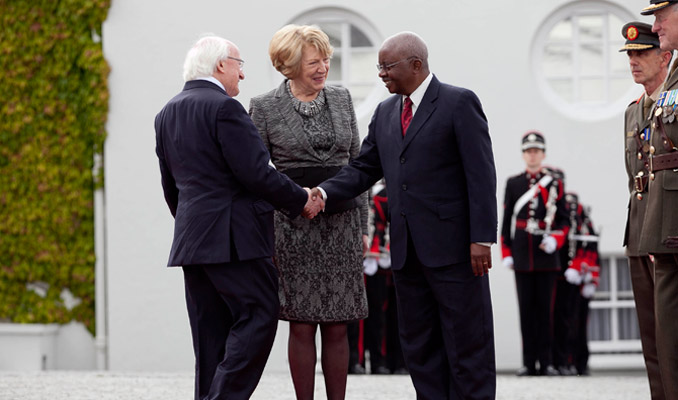 On Wednesday 4 June President Guebuza met the Taoiseach, Enda Kenny, TD, at Government Buildings and the Tánaiste and Minister for Foreign Affairs and Trade, Eamon Gilmore, TD, at Iveagh House. He also laid a wreath at the Garden of Remembrance and visited the National Museum of Ireland, Collins Barracks and St James’s Hospital before attending a State Dinner in his honour at Áras an Uachtaráin.

On Thursday 5 June President Guebuza had a programme of business and education meetings, including the Mozambique-Ireland Business Forum, and on Friday 6 June he visited Newgrange before departing Dublin.

The visit included the signing of agreements between Ireland and Mozambique across a range of areas including agriculture, health, education, development and trade.