Tánaiste in Armagh for Sport and Reconciliation Conference

Working for peace and reconciliation 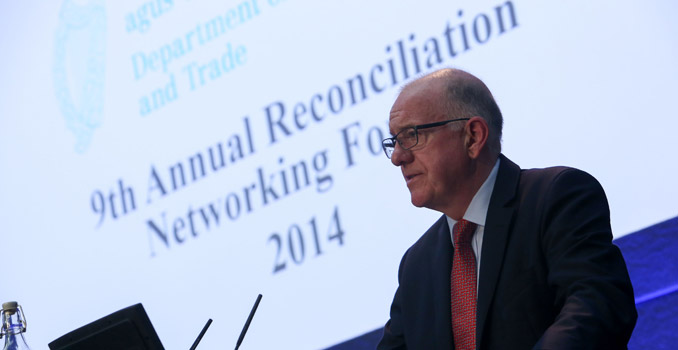 Twenty years on from the 1994 IRA and loyalist ceasefires and sixteen years after the signing of the Good Friday Agreement, the peace process has brought enormous dividends to all the people on the island of Ireland. This progress is the result of sustained effort by community groups, Northern Ireland political leaders, Governments and many, many others who have dedicated their time and energy to working for peace and reconciliation.

The annual Reconciliation Networking Forum brings together a broad range of community groups and voluntary organisations whose efforts towards reconciliation between the different traditions we support throughout the year. This year over 180 delegates from over 120 organisations are attending the Forum to discuss how best to manage the legacy of the Troubles, reduce segregation and combat sectarianism.

The Reconciliation Networking Forum provides the Irish Government with an opportunity to discuss with the civil society sector how best we can contribute to repairing those issues that lead to division and create barriers to the achievement of a peaceful, reconciled and forward-looking society.

The organisations supported by our Reconciliation Fund work in areas from commemorations and youth work to arts and culture.

Training for Women Network is a cross-community network, aimed at supporting women in training, employment and business, through policy, training, networking and education. The Reconciliation Fund is supporting TWN to provide training to marginalised women, on a cross-border basis.

Kids Own Publishing Partnership is a 32-County non-profit arts organisation and publishing house for children. The Reconciliation Fund has provided support to the organisation to undertake an historical research project related to the decade of commemorations.

Interaction Belfast aims to reduce interface violence, promote investment in development of derelict sites, and to challenge those conditions that sustain interfaces creating a vibrant, diverse, and well-resourced community. Their current work supported by the Reconciliation Fund seeks to develop a local understanding and definition of sectarianism and to create an anti-sectarianism charter in conjunction with other organisations. 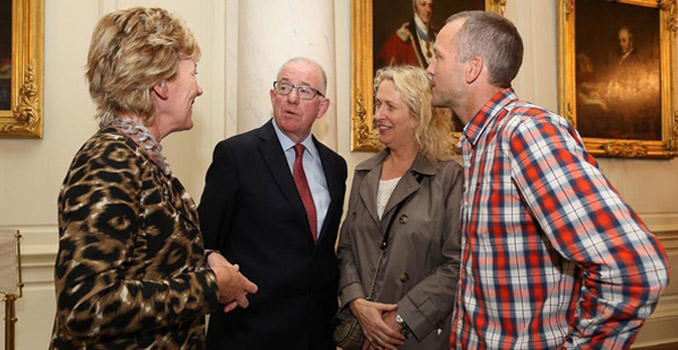 The forum gave over 120 organisations a chance to discuss how to further peace and reconciliation across communities on the island of Ireland.

In 2014 the Government’s Reconciliation Fund will provide €2.7 million in grants 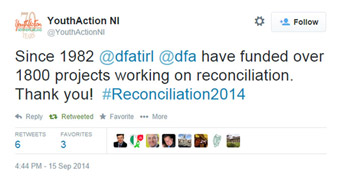 In 2014 the Government’s Reconciliation Fund will provide €2.7 million in grants to organisations working to eliminate sectarianism and to further peace and reconciliation in Northern Ireland, on a cross-border basis, and between Ireland and Britain

About the Reconciliation Fund and how to apply for funding

Tánaiste in Armagh for Sport and Reconciliation Conference