An exhibition of WB Yeats’s poetry is being featured on the Shanghai metro system until 18 December, and will be seen by hundreds of thousands of commuters. This is part of the international Yeats2015 celebrations which the Department of Foreign Affairs and Trade is supporting through its network of missions around the world. 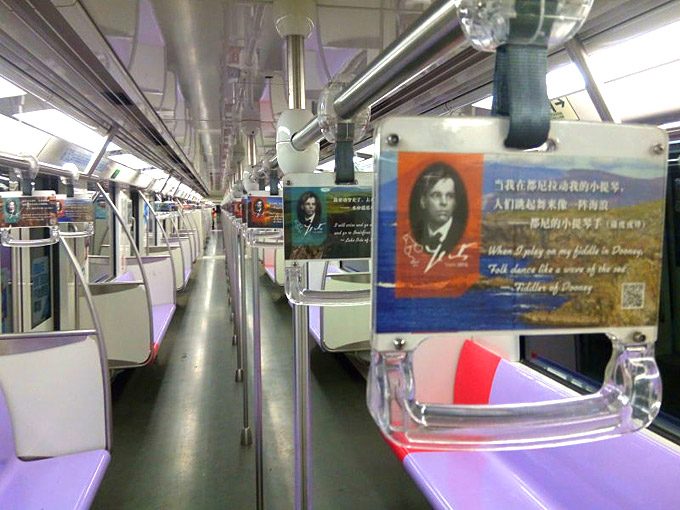 An exhibition entitled “Dance Like a Wave of the Sea - Ireland through the eyes of WB Yeats”, is being carried on the Shanghai Metro as part of the international Yeats2015 celebrations.

The exhibition was convened by the Consulate General of Ireland in Shanghai, working with the Shanghai People’s Association for Friendship with Foreign Countries and the Shanghai Shentong Metro Group.

‘Dance Like a Wave of the Sea’ - a line from Yeats’s poem ‘The Fiddler At Dooney’ - features quotes in Chinese and English from six of Yeats’ best-known poems, together with information on Yeats’s life and work and related images of Ireland.

“I am delighted that the Shanghai Metro is hosting ‘Dance Like a Wave of the Sea - Ireland through the eyes of WB Yeats’. This exhibition is an important part of the international Yeats2015 celebrations, which are supported by the Government and my Department.”

“I want to express appreciation to the Shanghai People’s Association for Friendship with Foreign Countries and the Shanghai Shentong Metro Group for their partnership with the Consulate General of Ireland in presenting this public exhibition of WB Yeats’s life and work.

"I hope this will increase interest in the works of one of our nation's greatest poets and encourage more visitors to come to Ireland." 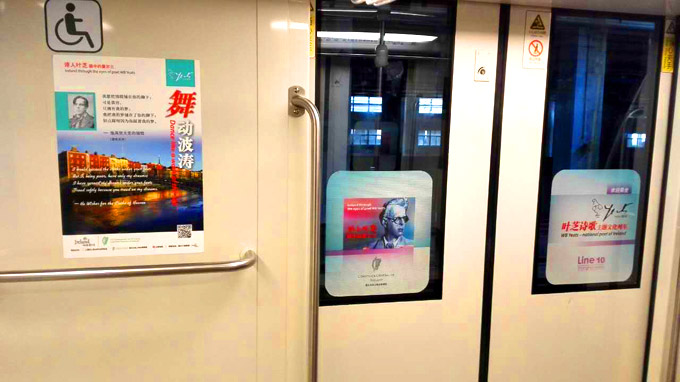 “As a Nobel Laureate for Literature, Yeats is already known and appreciated in China, especially for his poem ‘When You are Old’. With this exhibition on the impressive Shanghai Metro system, many more people in Shanghai will get to enjoy Yeats’s poetry and I hope that it will encourage them to discover more about Ireland.”

Speaking at the opening event for the exhibition, the Director of the Ireland Literature Exchange, Ms. Sineád Mac Aodha said:

“It is very exciting to see Yeats’s poems presented on the Shanghai Metro through this exhibition. Irish writers, both classic and contemporary, are becoming more and more popular in China. This exhibition gives a wonderful sense of Irish writing, and indeed Ireland, through the beautiful words of WB Yeats.”

The exhibition on the Shanghai Metro makes the connection between Yeats’s famous poem and Ireland - the country of his birth and the backdrop for much of his work.

Yeats’s contribution to world literature is recognised in literary circles in China, as it is around the world. Yeats’s poem, ‘When You Are Old’, is now a popular song in China, performed this year at the Chinese New Year Gala TV show, and this song also won the Chinese version of The Voice, with both shows watched by hundreds of millions of people.

The exhibition displays are being carried on billboard and LCD displays at several major metro stations, and on all carriages of a dedicated culture train on the Shanghai Metro system. This is one of the busiest metro systems in the world, and the Yeats exhibition will be seen by hundreds of thousands of passengers during its two-month run.

A public and press event to mark the Yeats2015 exhibition was held on Sunday 15 November at the main People’s Square Metro station in downtown Shanghai.

The event featured readings and interpretations of Yeats’s poetry in Chinese and English, Irish dance performances by a local Shanghai group and a rendition in Chinese of ‘When You Are Old’.

The Yeats exhibition has been profiled to millions more through press, tv and social media coverage in Shanghai.

Imagery for the exhibition was provided by Tourism Ireland and by Irish photographer, Donal Hackett. The Consulate in Shanghai received valuable assistance from the Yeats2015 Steering Committee in preparing the exhibition.

‘Dance Like a Wave at the Sea /舞 动 波 涛 - Ireland through the eyes of WB Yeats’, can be seen on the Shanghai Metro until 18 December. 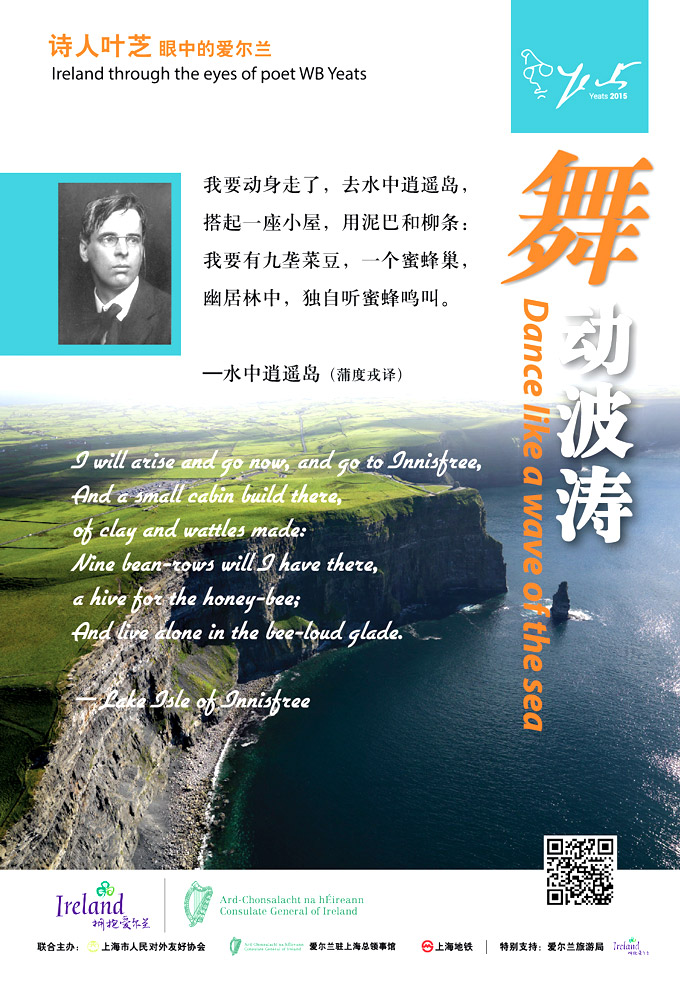