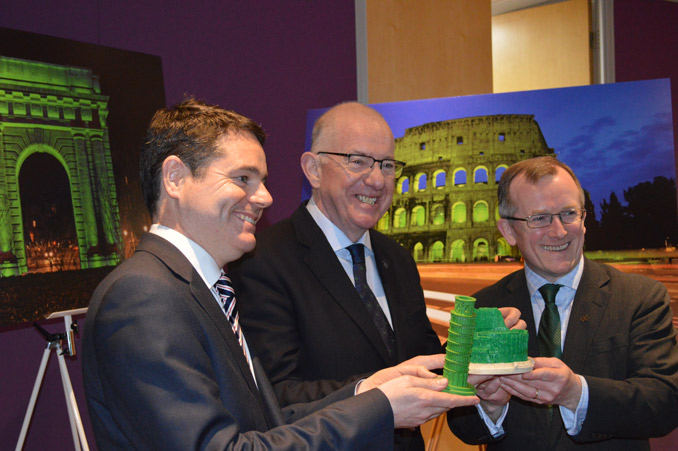 New ‘greenings’ in 2015 will include the Colosseum

The Colosseum in Rome, Sacré-Cœur in Paris and the Grand Ole Opry in Nashville will go green for the first time on St Patrick’s Day 2015.

Tourism Ireland today announced that the Colosseum in Rome and the Grand Ole Opry in Nashville will go green for the first time ever for St Patrick’s Day this year, as part of the sixth annual Global Greening initiative. The Global Greening demonstrates Ireland’s relationship with our diaspora and our strong partnerships around the world.

Tourism Ireland’s annual Global Greening, which sees a host of major landmarks and iconic sites around the world turn green for St Patrick’s Day, will see a number of new landmarks signing up to take part in 2015. As well as the Colosseum and the Sacré-Cœur, other sites going green for the first time include the famous Porte de Bourgogne in Bordeaux, the John Seigenthaler Pedestrian Bridge in Nashville, the Jumeirah Etihad Towers hotel in Abu Dhabi, the Town Halls of Munich and Bamberg, the National Sanctuary of Cristo Rei (Christ the King statue) in Lisbon, the Fram polar exploration ship in Oslo, as well as City Hall in Tbilisi.

‘Old favourites’ will again go green including Niagara Falls (on both the US and Canadian sides), the London Eye, the Allianz Arena in Munich, the Leaning Tower of Pisa, Burj Al Arab hotel in Dubai, the Sky Tower in Auckland, the Christ the Redeemer statue in Rio de Janeiro, Cibeles Fountain and Palace in Madrid and one of last year’s newcomers, Sleeping Beauty’s castle at Disneyland in Paris.

In Chicago numerous buildings and sites will go green including Navy Pier, the John Hancock Center, the United Center (home to the Chicago Blackhawks and the Chicago Bulls), the Wrigley Building, Trump International Hotel & Tower, Block Thirty Seven shopping mall, Old St Patrick’s Church and Macy’s department store. Special greening ‘selfie stations’ will also be set up around the city in the lead up to St Patrick’s Day.

The Global Greening for St Patrick’s Day 2015 was launched by Minister for Foreign Affairs and Trade, Charlie Flanagan, and Minister for Transport, Tourism and Sport, Paschal Donohoe, with Niall Gibbons, CEO of Tourism Ireland, on 11 February 2015.

“The Embassy Network, in cooperation with Tourism Ireland, has worked hard to secure these Global Greenings.

“The greening of iconic sites is also symbolic of the great friendship that exists between Ireland and so many countries around the world. It presents us with an invaluable opportunity to deepen existing friendships, strengthen awareness of Ireland and our rich heritage, and forge new ties.”