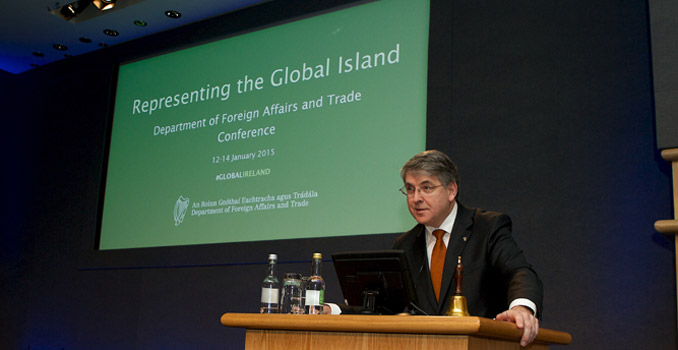 We maintain diplomatic relations with 178 states

Our 80 offices around the world maintain diplomatic relations on behalf of Ireland with 178 states. This network is critically important to our ongoing economic recovery. This conference, Representing the Global Island, will focus on how this Department can best deliver on the Government’s ambitious agenda in support of economic growth and prosperity and in protecting and promoting Ireland’s people and interests overseas.

This major three day conference brings together more than 90 Irish Ambassadors, Consuls General and senior diplomats with the Taoiseach, Tánaiste, Government Ministers, as well as representatives of Irish companies, other Government departments, the State Agencies, third level institutions and the creative sectors.

EU High Representative, Ms Federica Mogherini delivered a keynote address to the conference, following her meeting with Minister Flanagan at the Department of Foreign Affairs and Trade, at which they discussed major global issues including Ukraine, Syria and the Ebola crisis.

Over the course of the conference Ambassadors will meet directly with executives from more than 40 Irish companies to discuss the opportunities and challenges in international markets and how our embassies can help them to succeed.

We lobby, influence and negotiate for Ireland on issues that could impact our economic interests

The last time our Ambassadors met in such a forum was in 2011, when the Taoiseach tasked them with implementing the Government’s strategy to rebuild our international reputation. Ireland’s diplomats, in partnership with our colleagues across Government and in our State agencies, have worked hard to restore our reputation abroad, rebuild our economy and support Irish businesses.

We are meeting this week at a time when Ireland is in a much stronger position: we have successfully exited the Troika programme; unemployment has fallen to 10.6% from a peak of 15.1% in February 2012 and our economy is growing strongly.

Our focus now is on deepening the recovery and enabling companies to increase their exports and create jobs, including for those emigrants who wish to return. We work closely with the State agencies to:

Our embassies’ work in support of Ireland’s foreign policy interests include:

The UN Secretary-General's Special Adviser on Post-2015 Development Planning, Amina Mohammed will address the conferences on the crucial UN discussions to agree a new framework for international development after the UN Millennium Goals expire this year. Ireland was appointed by the UN Secretary General to co-facilitate these inter-governmental discussions