State Visit by German President, HE Joachim Gauck, to Ireland 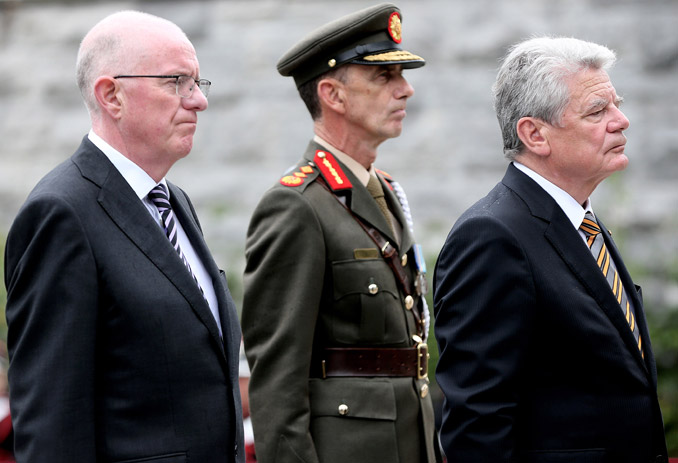 From 13 to 15 July 2015, the State Visit to Ireland by President of the Federal Republic of Germany, His Excellency Joachim Gauck, accompanied by Ms Daniela Schadt took place.

Germany is a key political and economic partner for Ireland

Our people-to-people ties are strong. Almost 540,000 German tourists visit Ireland each year, making Germany one of our top three tourism markets. President Gauck visited Dublin and the West of Ireland, where so many of his country people come each year to enjoy stunning scenery, delicious food and experience the warmth of an Irish welcome.

Germany is also a crucial trading partner for Ireland. Our bilateral trade with Germany is worth over €20 billion and this is expected to grow further.

Our bilateral trade with Germany is worth over €20 billion

The State Visit commenced with a formal welcome ceremony at Áras an Uachtaráin, where President Gauck and Ms Daniela Schadt were greeted by the President and Sabina Higgins. Minister for Foreign Affairs and Trade, Charlie Flanagan, TD, represented the Government at this ceremony. Following the formal welcome ceremony, the Heads of State held a meeting after which President Higgins invited President Gauck to plant a tree in the grounds of Áras an Uachtaráin.

President Gauck, accompanied by Minister Flanagan and the Chief of Staff of the Defence Forces, laid a wreath at the Garden of Remembrance. Later that day, President Gauck met the Taoiseach, Enda Kenny, at Government Buildings. He attended a Civic Reception in his honour hosted by the Lord Mayor of Dublin. That evening, the President and Sabina Higgins hosted a State Dinner at Áras an Uachtaráin in honour of President Gauck and Ms Schadt.

President Gauck made a courtesy call on the the Ceann Comhairle and Cathaoirleach in Leinster House. His programme also included business engagements in German software company SAP and a roundtable discussion on Strategic Banking Corporation of Ireland (SBCI) funding for SMEs, before visiting the Book of Kells in Trinity College.

President Gauck travelled to Galway for a programme at the National University of Ireland, Galway, which included a roundtable seminar on ‘Human Rights and Development’ with President Higgins, as well as the conferring by NUI Galway of an honorary degree on President Gauck. The programme of President Gauck and Ms Schadt also included a visit to a Droney Farm in Balklyvaughan, County Clare and the Cliffs of Moher in County Clare before they departed Ireland.

Ceremonial arrival at Áras an Uachtaráin and meeting with President Higgins

Wreath-laying at the Garden of Remembrance

Meeting with An Taoiseach

State Dinner at Áras an Uachtaráin

Roundtable Seminar at the Irish Centre for Human Rights, NUIG, followed by Conferring of Honorary Degree by the National University of Ireland, Galway, on President Gauck