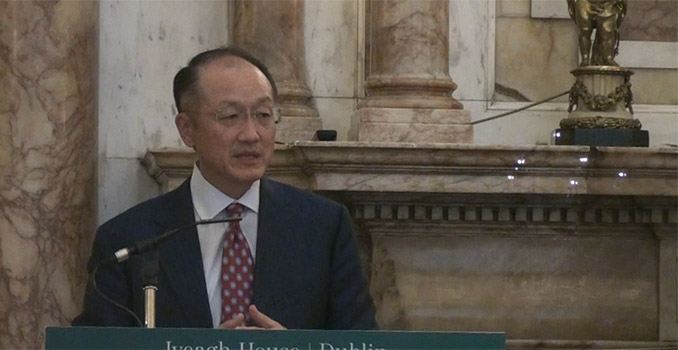 Established in 1944-45, the World Bank serves as a framework for international economic cooperation. Since the creation of the Bank’s International Development Association in 1960, the Bank has focused increasingly on lending to the world’s poorest countries, an effort that Ireland has helped to finance through Irish Aid, the Government’s development programme. The current World Bank Group has adopted as its key missions promoting shared international prosperity and ending extreme poverty by 2030.

President Kim was welcomed by Minister Flanagan, who acknowledged that at this time of change and challenge in the international system, it was an honour to hear the views of “one of the most influential proponents of the concept of shared prosperity and shared global citizenship.

At the World Bank Group, we want to give all people an opportunity for prosperity – President Kim

President Kim described his country’s – Korea - and Ireland’s recent history of rapid economic growth and relative equality as compelling. Promoting economic growth, agricultural development, health and education have been central to both Korea’s and Ireland’s development and are also central to the World Bank Group’s global agenda. President Kim also highlighted the challenges in developing plans for global action to protect against pandemics and climate change “….global threats that push people into poverty, undermine prosperity and put at risk the human race’s very survival.”