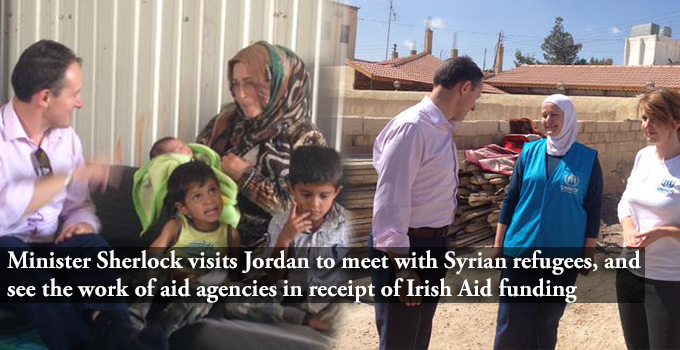 On October 8th, Minister Sherlock held a bilateral meeting with Ms. Maha Abdul Rahim Ali, the Jordanian Minister of Industry, Trade and Supply. The meeting was an opportunity to express solidarity with the Jordanian authorities, and to demonstrate Ireland’s support for the ways in which they were addressing these challenges.

As a result of the Syrian crisis, there are more than 620,000 Syrian refugees in Jordan

He then met with refugee families and visited Azraq refugee camp in northern Jordan, home to almost 25,000 Syrian refugees. The camp, which opened in 2013, is managed by the Jordanian authorities and the United Nations High Commissioner for Refugees (UNHCR). There the Minister spoke with camp officials, and saw first-hand the living conditions of refugees and the work of agencies receiving Irish Aid support.

As a result of the Syrian crisis, there are more than 620,000 Syrian refugees in Jordan, a country of 6.3 million people, and the influx has put a massive strain on the country’s education, health and scarce water resources.

Irish Aid’s support to the Syrian people so far this year has included €800,000 in support to UNHCR’s work in Jordan, and Irish Aid has also supported the work of Non-Governmental Organisations (NGOs) such as Tearfund and Oxfam specifically in Jordan.

Ireland has pledged funding of €12 million to aid the Syria crisis in 2015, and so far more than €10 million of this has been provided to the UN, Red Cross and NGO partners. 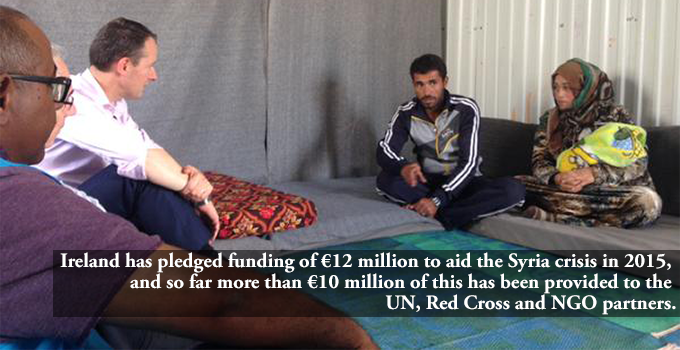