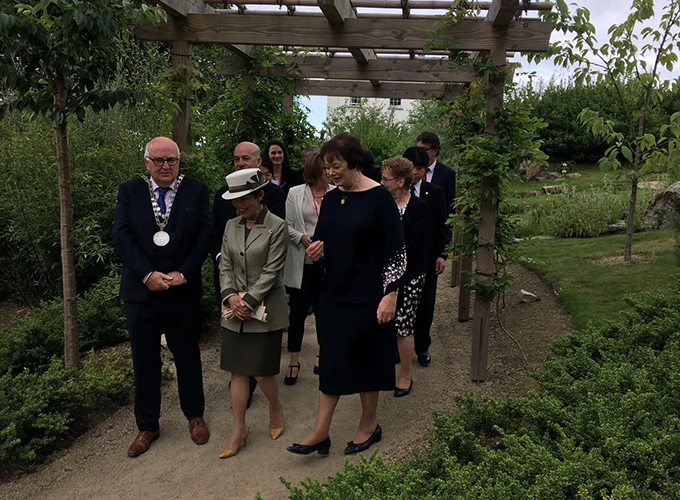 Her Imperial Highness Princess Hisako Takamado visited Ireland from 7-10 July in the context of the celebrations to mark the 60th anniversary of diplomatic relations between Ireland and Japan. This is the Princess's second visit to Ireland, having attended the 2003 Special Olympics World Summer Games. At the time she attended a number of events including volleyball, athletics and swimming, and supported the Japanese team. Her Imperial Highness also met President Mary McAleese at Áras an Uachtaráin on 27th June 2003.

On 7th July, the Princess paid a courtesy call on President Michael D. Higgins at Áras an Uachtaráin. Accompanied by the President and Sabina Higgins, the Princess visited the tree planted by Emperor Akihito, when the then Crown Prince visited Ireland in 1985. The Princess’s dedication to important causes was reflected thereafter by a visit to the Laura Lynn Children’s Hospice.

On Saturday 8th July, Her Imperial Highness received a private viewing of the collection of Japanese scrolls and surimono prints on exhibition at the Chester Beatty Library, before presiding over the inauguration ceremony of an exhibition entitled “Preserved in Partnership: Treasures of Japanese Art”. The Tánaiste, Frances Fitzgerald T.D., greeted the Princess on arrival.

On Sunday 9th July, Her Imperial Highness visited the Special Areas of Conservation of Lambay and Rockabill Islands. In the evening, the Minister for Justice & Equality, Charles Flanagan T.D., and his wife Mary Flanagan, hosted a dinner in honour of the Princess at Iveagh House. On Monday 10th July, Her Imperial Highness visited the Lafcadio Hearn Gardens in Tramore before departing Ireland later in the day.

The Princess is well known to the Irish community in Japan. She has attended the St. Patrick’s Day Emerald Ball for a number of years, and has participated in a number of events this year as part of the celebrations to mark the 60th anniversary of diplomatic relations between Ireland and Japan, including attendance at a version of WB Yeats’ Noh Play The Hawk Princess with music by the Celtic singing group Anúna last February. The visit of Her Imperial Highness to Ireland has been a highlight of the anniversary year.