Visit to Japan of Minister for Foreign Affairs and Trade, Charles Flanagan T.D. 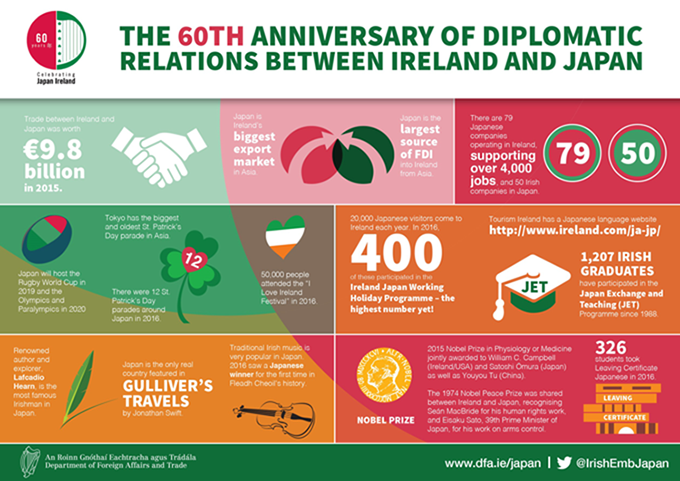 Visit to Japan of Minister for Foreign Affairs and Trade, Charles Flanagan T.D.

The Minister for Foreign Affairs and Trade, Charles Flanagan T.D., visited Japan on the invitation of the Japanese Government from 26 February to 4 March 2017, as part of the official celebrations of the 60th anniversary of diplomatic relations between Ireland and Japan. It was the Minister’s first visit to Japan, the first by an Irish foreign minister since 2007, and followed on from the successful visit of Foreign Minister Kishida to Ireland in January 2017. 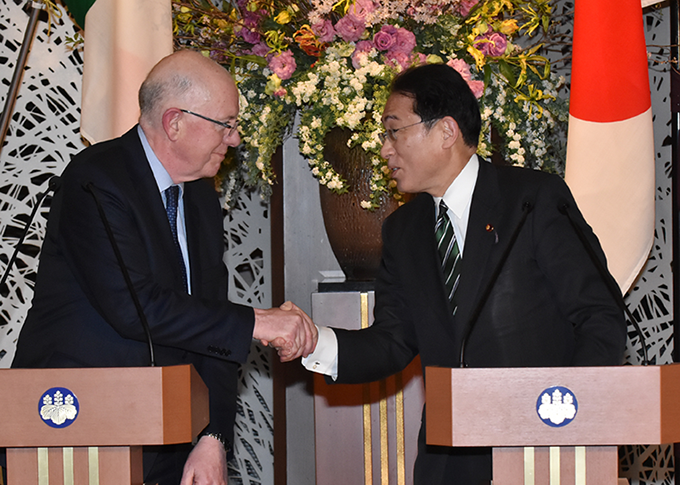 Minister Flanagan commenced his visit with a trip to Hiroshima – site of the atomic bombing of 6 August 1945 – and paid his respects at the memorial to the 140,000 people who were killed in the horrific attack. The Minister was fortunate to have the opportunity to meet with Ms. Yoshiko Kajimoto, one of the survivors of the bombing (known as Hibakusha in Japan), and spoke of how her inspiring and courageous testimony redoubled his conviction that the world should strive towards a future free of nuclear weapons. Ireland, as one of the co-signatories of the Nuclear Non-proliferation Treaty, is a close partner of Japan’s in working towards nuclear disarmament. 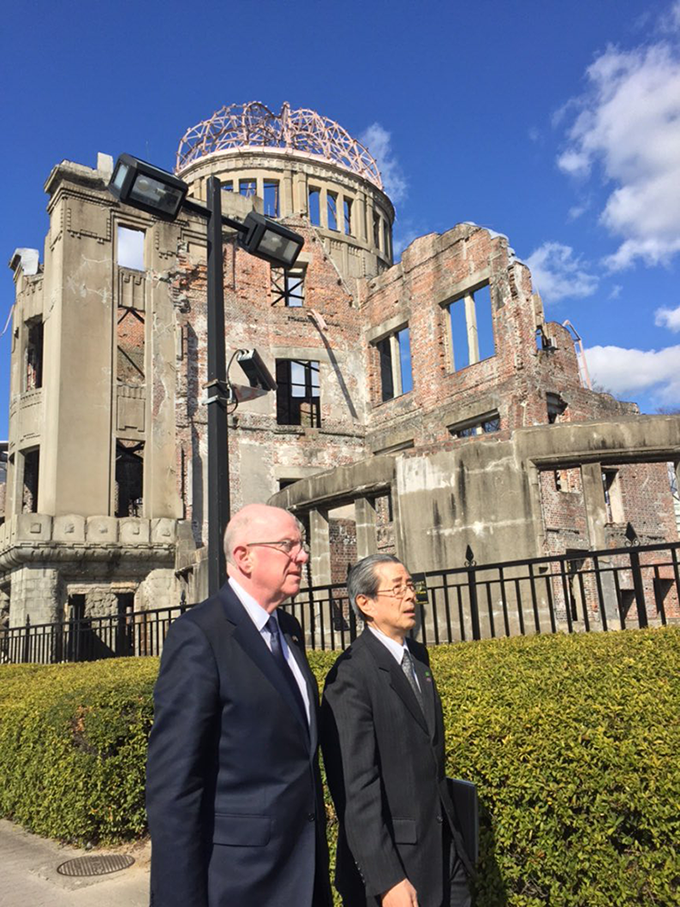 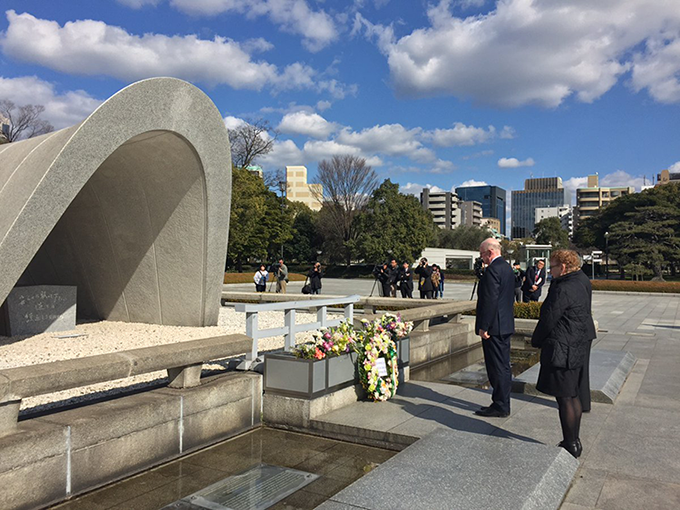 The Minister then travelled on to Tokyo by shinkansen, or ‘bullet train’, where he held a series of meetings with Japanese business interests. He began by addressing the Keidanren, Japan’s influential business lobby, and took the opportunity to explain Ireland’s position on international issues such as the UK’s decision to leave the EU, and how Ireland can act as a gateway to the European Union marketplace for Japanese companies. With 79 Japanese companies already operating in Ireland, the Minister explained how their success should act as a template for further bilateral trade and investment. Minister Flanagan also met a range of other businesspeople with interests in Ireland.

Ireland’s Ambassador to Japan, Ms. Anne Barrington, then hosted an event for the Minister and representatives from the financial services industry, where the minister spoke about Ireland’s unique offering in financial services, and the objectives of the IFS2020 strategy.

From there, it was on to the International House of Japan for an event in partnership with the Japan Institute of International Affairs, one of Asia’s most highly-respected think tanks, where the Minister delivered a lecture on many of the same themes to academics, the diplomatic corps and journalists. 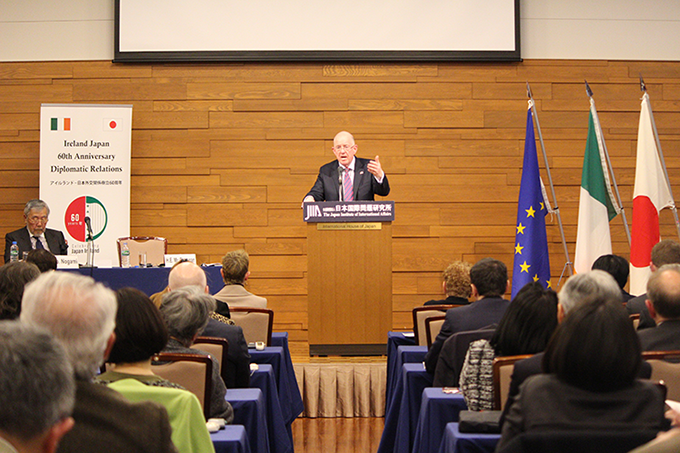 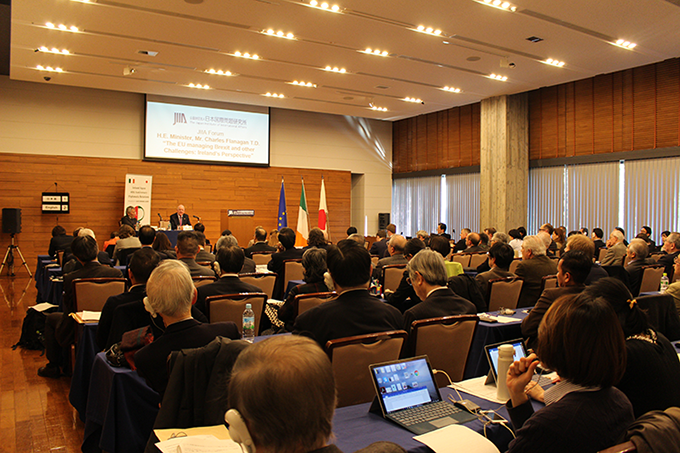 The following day began with a meeting with the Ireland Japan Chamber of Commerce. The Chamber represents the interests of Irish companies in Japan, liaises with Japanese companies which operate in Ireland, and also organises a range of business and cultural events, such as the ‘I Love Ireland Festival’. The Chamber’s members were able to present an on-the-ground viewpoint of what it takes for Irish companies to succeed in Japan, while the Minister took the opportunity to provide updates on his meetings on Brexit with the EU’s foreign ministers and on his recent trip to the United States to meet the new administration.

Later that morning, the Minister travelled to the Japan National Press Club, and delivered a speech on the Irish commitment to the EU and Ireland’s response to the UK’s decision to leave. This was followed by an exchange with journalists. The following day, an op-ed by the Minister was published in Nikkei, a financial newspaper with a daily circulation of 4.5 million. 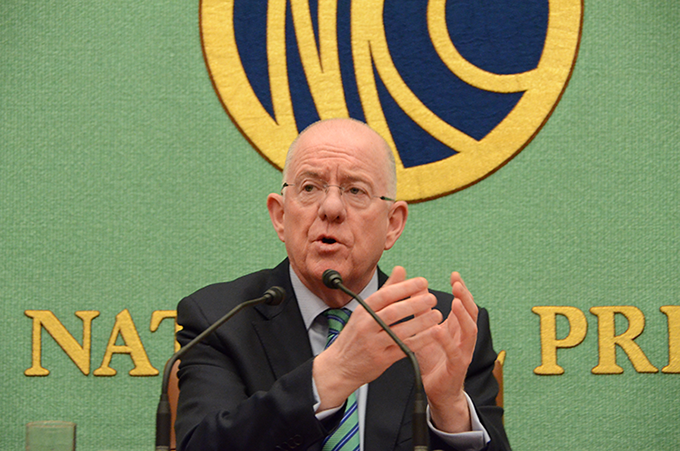 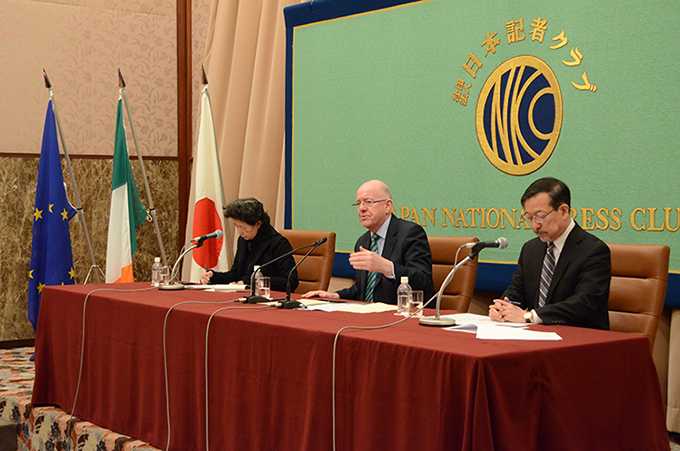 The Minister was then hosted by the Japan-Ireland Parliamentary Friendship League in the House of Representatives, where members of the League took the opportunity to explain their interest in Ireland and ask questions about recent domestic developments. The League is chaired by Japan’s Minister for Agriculture, Fisheries and Forestry, Mr. Yuji Yamamoto.

The day concluded with a working dinner hosted by Foreign Minister Kishida, in Iikura House. The ministers and their delegations discussed a wide range of issues relating to each country’s respective relations with the EU, the US and Asian partners and then agreed on ways to further develop the Ireland-Japan bilateral relationship. The two foreign ministers commenced the meeting with an exchange of rugby jerseys, which had 60 printed on the back, in light of the anniversary of diplomatic relations. Minister Flanagan wished Japan success in the 2019 Rugby World Cup, and said he looks forward to seeing Ireland lift the William Webb Ellis Trophy in Yokohama. He also mentioned Ireland's bid to host the Rugby World Cup in 2023. 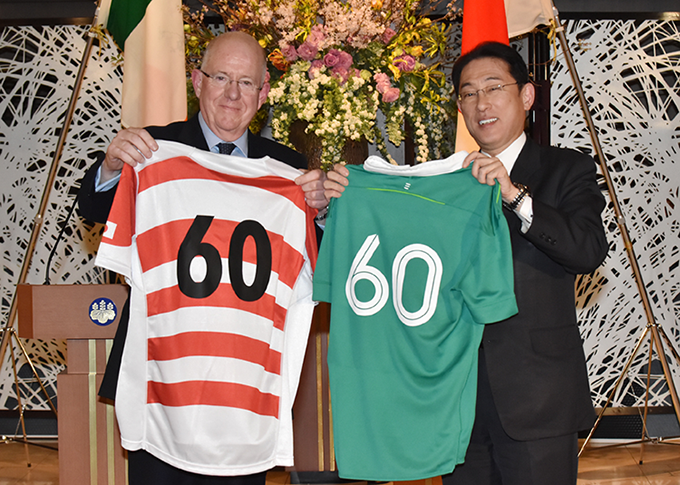 The Minister concluded his trip to Japan with a visit to Kyoto and Osaka, including an event for the Osaka branch of the Ireland Japan Chamber of Commerce and members of the Irish community.