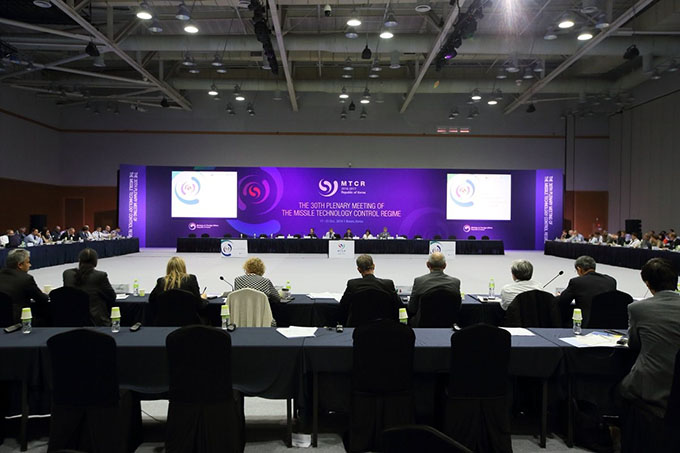 Delegates at the 2016 Plenary meeting of the Missile Technology Regime in Busan, Republic of Korea in October 2016. Source: @MTCR_Chair

The proliferation of WMD and their means of delivery remain an ever present, and increasing threat to international peace and security. Given the interconnected nature of the world we live in today, multilateral tools and regimes, which can help to raise both awareness of, and prevent such proliferation, assume critical importance. With regard to WMD's and their means of delivery, the Missile Technology Control Regime (MTCR) constitutes a key instrument in terms of international efforts to prevent missile proliferation.

The MTCR is an Export Control Regime, based on an informal political understanding among States, which seeks to limit the spread of missiles and missile technology.

In the 30 years since the MTCR was established, the regime has proven to be a useful multilateral non-proliferation mechanism. Through information sharing, export controls, awareness raising and international cooperation, the MTCR has significantly reduced the ability of proliferators to acquire the technology, information and means to develop WMD missile delivery systems.

Ireland is an active member of the Missile Technology Control Regime (MTCR), having joined in 1992. Formed in 1987, the MTCR now has 35 member countries*.

In October 2016, then Minister of Foreign Affairs and Trade Charles Flanagan T.D., announced that Ireland would assume the role of Co-Chair, together with Iceland, of the Missile Control Technology Regime (MTCR) for the 2017-18 period. This role will formally commence on October 18th 2017, when the tenure of the current Chair, the Republic of Korea, concludes. This is the first time that Ireland will chair an international export control regime. The Irish MTCR Co-Chairmanship team will be led by Ireland’s Ambassador to Switzerland and former Director and Non-Proliferation Director, Breifne O Reilly and the Icelandic MTCR Co-Chairmanship team will be led by Minister-Counsellor Bjarni Vestmann.

Ireland will host the Plenary meeting of the MTCR in Dublin from 16th to 20th October. 250 experts from 34 countries will travel to Ireland to discuss issues related to missile proliferation including licensing and enforcement challenges and technological developments.

During their tenure as co-chairs, Ireland and Iceland will work to enhance the effectiveness of the regime and will also undertake outreach to non-partners and international organisations in order to raise awareness of the MTCR and its work in terms of preventing the missile proliferation.

See more information on the work of the MTCR.