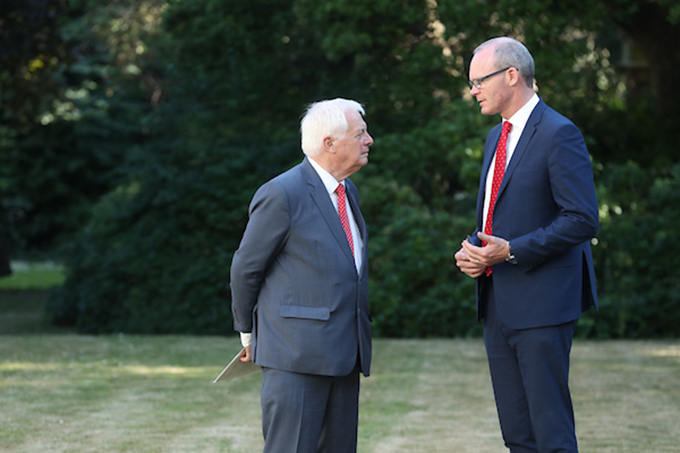 The Tánaiste and Minister for Foreign Affairs and Trade Simon Coveney, T.D. hosted Lord Patten of Barnes on Wednesday, 27th June. Lord Patten, former Governor of Hong Kong, was in Ireland to deliver an Iveagh House lecture entitled “Ireland, Britain and the Challenge of Nationalism.”

In his opening remarks, the Tánaiste emphasized Lord Patten’s crucial role in strengthening the relationship between Ireland and the United Kingdom, both in past actions and more recently in Brexit discussions.

Lord Patten began his lecture by speaking broadly about personal and national identity. After discussing British and Irish identity in particular, he raised the issue of the rise of nationalism in Europe and America as an anxiety-inducing one. This, he said, is one of the factors which led to Brexit. Over the course of the lecture, Lord Patten touched on a variety of related topics, including Britain’s “nationalist rage,” the likelihood of the survival of liberal democracy, and his own concerns about the impact of Brexit.

A former Conservative Party MP, Lord Patten chaired the Independent Commission on Policing for Northern Ireland, better known as the Patten Commission, between 1998 and 1999. He also served as the final British Governor of Hong Kong and was a member of the European Commission between 1999 and 2004.