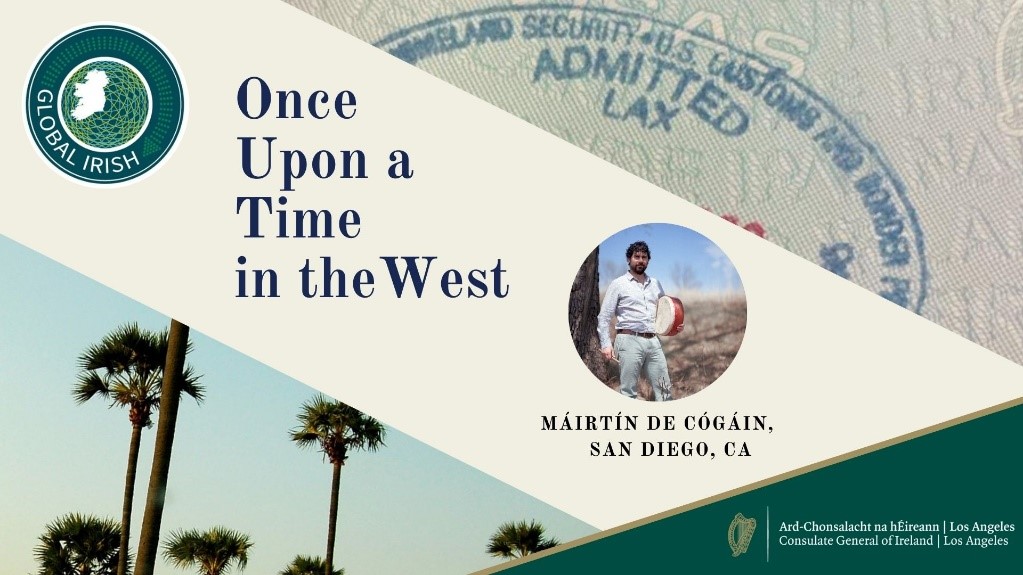 Máirtín de Cógáin is a musician/songwriter/storyteller and performed at the official opening of the Los Angeles Consulate. A fluent Irish speaker, he is currently advising a Disney production with Irish translation and assisting actors with the language. He lives in San Diego with wife Mitra and two sons, Milo and Finn.

1. How long have you lived in the US? What brought you here initially?

I came over for the love of a woman! My (now) wife came from California to study at University College Cork where we met in 2001. We started dating but I already had a round the world trip planned! Off I went only to realize I was happier where she was! Mitra started medical school in Kansas City and so I followed. Once our band (Fuchsia) got visas we started travelling and performing at gigs like The Westin Irish Festival and Kansas City Irish Fest. After medical school, we moved to Rochester Minnesota where Mitra did her residency at The Mayo Clinic.

2. What was your initial impression of the US and life here?

My first ever visit to America came in 1999 with my sisters dance show in Rhode Island. After that, part of my world trip landed me in San Francisco, and initially I remember it being loud, busy and so expensive!

3. Having seen so many parts of the US, was your experience similar throughout?

Actually, although you meet many different people across the US, I found American people to be super friendly no matter what state you are in. You talk about the Céad míle fáilte when visiting Ireland, I found people genuinely very nice here and they are willing to go out of their way to make sure you are doing all right.

4. Have you any highlights of your time in the US?

Of course, my wife and two boys, Milo and Finn, would be up there! After that, playing the main stage with the Fuchsia Band at the Milwaukee Irish Fest was great. This year, we did a rendition of 'Óró, sé do bheatha bhaile' with Ambassador Dan Mulhall on the Main Stage!

A few years ago, I remember getting a call from a friend asking if I could play the bodhrán with the Chieftains at their gig in Chicago. We had very little rehearsal so you had to know what you were doing! It was broadcast live and an unforgettable experience.

I also have not forgotten my Irish Man of the Year award from the Irish Congress of Southern California in 2018, which also happened to be the last St Patricks Day parade we had in San Diego.

5. Ireland and its image abroad has changed a lot over recent decades. How do you imagine Irish communities in the US might change in the coming years?

I think America is looking more seriously at Ireland now than before. They see an educated, hardworking people. You have companies like Stripe coming from Limerick, the Biotech industry and here in San Diego you have Taoglas making high tech chips. Of course, the movie industry has a spotlight on Ireland with many more films being shot and some high profile actors coming through.

When I was travelling twenty years ago I found many people who left Ireland wanted to explore a new world and not necessarily hang out at the Irish bar or restaurant. I think people are more confident in their Irish-ness now, identifying in different ways whether it be through music, hurling or (Gaelic) football teams. I think this generation is a slightly different expatriate. Travelling over and back to Ireland is not as drastic as in the past. You can visit twice a year if you like.

I love Dingle and the Cliffs of Moher but they are always so busy! For our last few trips, we spend half our time with family and then we hire a car and go visit a place we have never been, which is part of the magic of Ireland I think. Just spend time really exploring an area. Rathcroghan in Co. Roscommon was a magical place.  Oweynagat (Cave of the Cats) and the seat of Queen Medb, such history there that you can literally touch. Ireland is so full of fascinating history that is accessible and not necessarily behind glass in a museum. Even in my hometown of Carrigaline, we have a castle which dates back to the 1180’s and was built by ancestors of my own (de Cogan). I have always wanted to do a boat trip through the canals or down the river Shannon in the midlands.