The British and Irish Governments enjoy a strong partnership that supports reconciliation and prosperity for both countries. 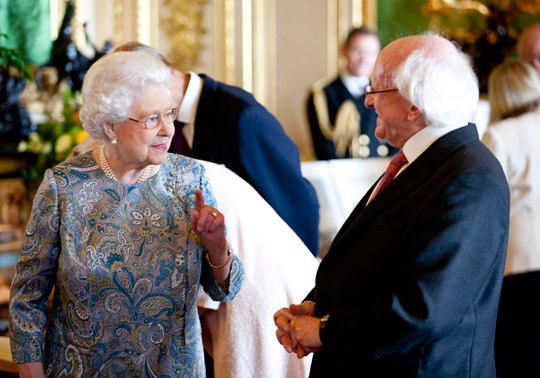 Britain is our closest neighbour and most important economic partner, in trade, investment and tourism. €1 billion of trade in goods and services flows across the Irish Sea every week.

The visit of Queen Elizabeth to Ireland in May 2011 was the first visit of a British Head of State to Ireland since independence. Since then, both Governments have been working closely to build on the success of the visit and to deepen our working relationship.

The highly successful first State Visit of an Irish President to UK took place from 8-11 April 2014. The visit included a state banquet at Windsor Castle, a Presidential address to both Houses of Parliament at Westminster and the laying of a wreath at the Grave of the Unknown Warrior at Westminster Abbey. There were also events to celebrate the cultural, economic and social ties between Ireland and Britain and the contribution of the Irish community in Britain.

The Visit highlighted the joint approach to commemorations throughout the decade in question. In Windsor Castle on 9 April, the President viewed the Colours of the five Irish regiments of the British army that were disbanded following the establishment of the Irish Free State in 1922, accompanied by the Duke of York, Prince Andrew, and the Duke of Edinburgh. This event emphasised the shared history of the two countries, and the respect held for the tradition and legacy of Irish Regiments and their immense contribution.

The State Visit was an opportunity to reflect on the strength and depth of our relationship with our closest neighbour. More than anything else, the visit gave us an opportunity to celebrate the many connections between Britain and Ireland. Our political relationship, our economic partnership and our cultural connections are stronger than ever, and are underpinned by a thriving and vibrant Irish community. This State Visit, together with the State Visit of Queen Elizabeth to Ireland in 2011, reflect the positive and constructive nature of Irish-British relations today.

The joint statement issued by the Taoiseach and Prime Minister Cameron following a summit meeting in Downing Street in March 2012 sets out the key areas for British-Irish co-operation over the next decade.

The statement was significant because it was the first such statement not primarily concerned with the situation in Northern Ireland.

The British-Irish Council (BIC) was created under the Good Friday Agreement to promote positive and mutually beneficial relationships among the people of these islands and to provide a forum for consultation and co-operation.

The Council is made up of representatives of the Irish and British Governments, of the devolved institutions in Northern Ireland, Scotland and Wales, and of the Isle of Man, Guernsey and Jersey.

The standing secretariat to the British-Irish Council was established on 4 January 2012 and operates in Edinburgh. It is headed jointly by two officials, appointed by the Irish and British Governments.

The British-Irish Parliamentary Assembly (BIPA) was set up in February 1990 to act as a link between the Oireachtas and the Houses of Parliament at Westminster.

Originally called the British-Irish Inter-Parliamentary Body, it was made up of 25 Irish and 25 British parliamentarians from the Upper and Lower Houses of the Oireachtas and Westminster.

The BIIPB was renamed as the British-Irish Parliamentary Assembly during the 37th Plenary at Newcastle in October 2008.

BIPA’s members meet in plenary session twice a year.  Between these sessions, the main work of the Assembly falls to four Committees, which deal with the following subjects: