On 26 November 2013, President Higgins presented the 2013 recipients of the Presidential Distinguished Service Award for the Irish Abroad with their Awards.

Recipients of the Presidential Distinguished Service Award for the Irish Abroad are honoured for their distinguished service to the nation in the fields of peace-building, charitable work, business, education and arts culture and sport, among others.

The Presidential Awards were established by the Government after the 2011 Global Irish Economic Forum.

The 2013 recipients have given distinguished service to our nation and helped to build our reputation around the globe. Their contribution is immeasurable.  Ireland is fortunate to have ambassadors and advocates of the calibre of Dr. Anne Merriman in Africa and Sister Cyril Mooney in India, who have helped hundreds of thousands of the world’s poorest people, and Craig Barrett, whose leadership in the fields of technology and education is second to none.  These awards also recognise the tireless and crucial work of those like Rodney Walsh in New Zealand and Seamus McGarry and Mary Tilki in the UK in assisting Irish citizens abroad. Senator George Mitchell who has lent his skill, his reputation and his time to building peace on our island was also honoured for his vision and his tenacity in December.

At the event to honour the 2013 recipients of the Award, the Tánaiste commented that the “awardees put on display the full spectrum of the best qualities of the Irish.   They are, as President Higgins said earlier, creative and compassionate.  They are also tough-minded and persistent.   They are charming and purposeful”.   In addressing the recipients the Tánaiste continued “your exceptional work and achievements have singled you out for recognition by the President.  You are an inspiration to us here at home and, I know, to those with whom you work directly.”

The recipients of the Presidential Distinguished Service Awards in 2013 are: 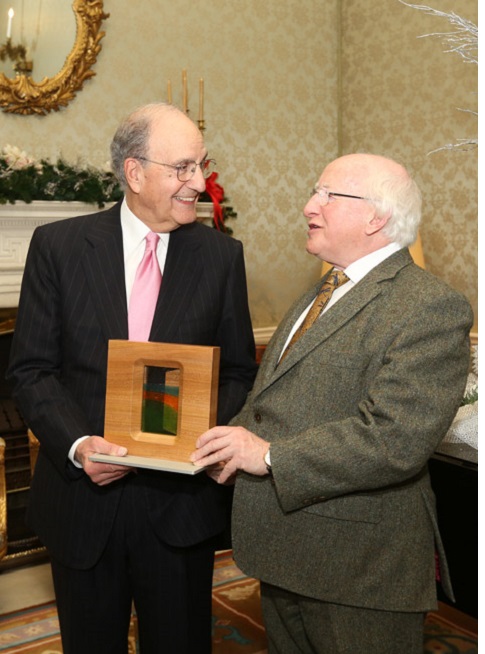